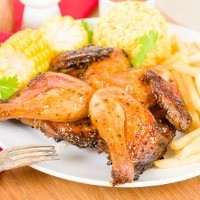 A Nando’s restaurant in Brisbane has been caught withholding the wages of a new staff member in a bid to keep them on the job for at least three months.

The former employee, who was a 25-year-old Korean national in Australia on a working holiday visa, was underpaid thousands of dollars after his wages were unlawfully withheld at a Nando’s franchise in Kelvin Grove.

The man was also not paid the correct minimum hourly rate or penalty rates at a sister restaurant in the inner suburb of Newstead, receiving as little as $12 an hour.

The franchise’s sole director, Ujjiwal Singh, has signed an enforceable undertaking with the Fair Work Ombudsman and agreed to back-pay the former employee – who has since returned to Korea – more than $5000.

The employee watchdog had previously received complaints from employees at both Nando’s restaurants.

As part of the enforceable undertaking, both Singh and his companies will have to undertake training and commit to complying with federal workplace laws from now on.

“For award-based employees it’s simply not on,” Vitale says.

Vitale says deductions from an employee’s wages are only lawful in a limited number of instances and even then it has to be for the good of the worker and not the employer.

“In some instances there might be staff loans which are to be repaid over time.”

A spokesperson for Nando’s Australia told SmartCompany the Nando’s business model is a mix of company and franchisee-owned restaurants, with both the Kelvin Grove and Newstead restaurants franchise-owned.

“While we take the personal wellbeing and employment rights of all staff very seriously, the restaurant employment practices at our franchise restaurants are the responsibility of the franchisees who hire staff to work in their businesses,” she says.

“Nando’s Australia’s franchise agreement is clear on the requirement for franchisees to assume responsibility for compliance with relevant laws, including employment and immigration law.”

Acting Fair Work Ombudsman Michael Campbell said in a statement, in this case the act of deducting the employee’s wages served only to benefit the employer.

“Deducting money from an employee’s wages as a punishment, or as some sort of performance management tool, is completely unlawful,” Campbell said.

“And it is clearly not a constructive way of encouraging staff to improve their performance if there are performance issues that need addressing. Research shows that employees are most productive and motivated when they are part of a workplace culture in which their contribution is valued and there are strong, positive leaders who encourage them to perform at their best.”

While Campbell acknowledged that workplace laws are “complicated”, the employer watchdog does not look kindly on businesses who exploit overseas workers.

“We know workplace laws can seem complicated for the uninitiated, but we ask small business to use the tools and resources that we provide for them and inform themselves,” he said.

SmartCompany contacted Ujjiwal Singh but did not receive a response prior to publication.