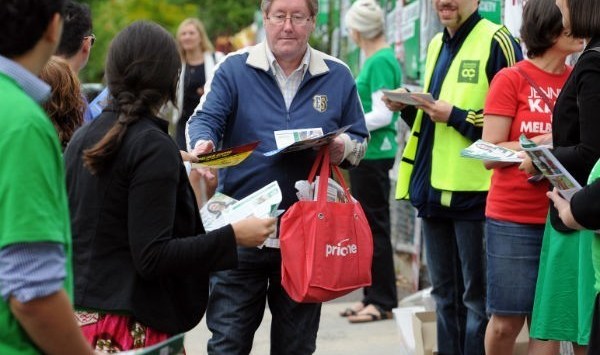 The Fair Work Ombudsman is taking legal action against the No Land Tax Campaign in New South Wales and its party leader Peter Jones over payments owed to 21 workers who worked for the party during the NSW election campaign in March.

Better known as the No Land Tax Party (NLTP), the activist group captured media attention after it secured the number one spot on the ballot paper and fielded candidates in every lower and upper house seat in the state earlier this year.

On Monday the Ombudsman revealed it had initiated legal action in the Federal Court against the party after receiving almost 1000 requests for assistance from workers who said they weren’t paid promised wages for handing out how-to-vote cards on election day.

The workers were allegedly offered $30 an hour for the work, as well as $500 bonuses if candidates polled well, by brochures mailed out to NSW homes by the party prior to the election.

The workers generally worked shifts of between nine and 10 hours on election day, Fair Work said in a statement.

While the Ombudsman believes up to 3600 people could have been affected, it is only commencing legal proceedings in relation to 21 workers.

Some of the 21 workers were teenagers, with the youngest one aged 14, and as a group are allegedly owed a total of $6155.

Fair Work Ombudsman Natalie James said in a statement the ombudsman had made “every effort” to resolve the matter without the need for legal action, and cited Jones’ lack of co-operation on the matter, including a failure to take part in interviews with inspectors.

Will Snow, senior associate at Finlaysons, tells SmartCompany this morning the case is a “very unusual situation”.

“A person saying they’re paying $30 an hour for handing out how to vote cards, that’s perhaps too good to be true,” he says.

Snow says new political parties are not known to be swimming in funding, and equally it is uncommon for campaign volunteers to be paid on election day, but the people doing the work should have been paid.

“It’s unusual and you can see why they’d be taking action,” he says.

Snow says it will be interesting to see if the Ombudsman’s action will result in the party paying the workers.

“The biggest question is always; can they pay?,” he says.

Snow says it is likely the Ombudsman would have selected the people it was most interested in taking legal action on behalf of, especially the 14-year-old.

“For someone who is 14, to have one of their first experiences in paid workforce, to not get paid (is one reason),” he says.

Snow thinks the Ombudsman’s decision to take legal action for only a handful of the thousands of workers allegedly affected by the non-payments is a matter of resources.

“While it would be interesting to take action on behalf of the 3500 odd people, getting a matter through a court requires every single one to be committed to the action,” he says.

“It’s a matter of practical reality.”

Snow also says Jones, as the party’s leader, would feel “very much in the spotlight” on this matter.

“His house could be on the line, let alone his political career or support at the next election,” he says.

Snow believes there could be broader reaching consequences because of the litigation.

“It’s an interesting case of damage to your wider brand in the context of employment; this is a fledging party trying to garner community support on an issue but at same time having legal action launched against for not complying with the law,” he says.

Snow says small and medium size businesses can learn from the case.

“You’ve got to be very careful about creating open-ended arrangements which you can’t monitor,” he says.

“This is almost like a global job offer; everyone get on board, I’ll pay you.”

Snow says it is likely that the party could only have afforded to pay much fewer people.

“If you’ve got a particular job you’re putting out there, really have a proper budget behind it,” he says.

SmartCompany contacted the No Land Tax Party for comment but did not receive a response prior to publication.