Courts handed down $7.2 million in penalties over breaches of the Fair Work Act in the 2017-18 financial year, an increase of 49% from the financial year before.

The figures were revealed in the ombudsman’s annual report, released on Thursday afternoon, and includes a record fine of $660,020 from August last year for a fruit market that didn’t pay a migrant worker.

The spike is, according to workplace lawyer James Francis, indicative of the ombudsman’s increasing focus on underpayments.

“These penalties are a response.”

The ombudsman used enforceable undertakings seven times in 2017-18, recovering more than $2.1 million in back payments. There were 615 infringement notices issued, 220 compliance notices and 35 litigations commences.

Many more people are seeking information from ombudsman services, with a 10% increase in the use of its pay and conditions tool and a 44% increase in reports to over 15,000.

Chris McArdle, principal lawyer at McArdle Legal, which specialises in migrant cases, says the increase in workers reaching out was not surprising.

“People now know their rights, people used to take it on the chin once, but they don’t now,” he tells SmartCompany.

“In recent years, particularly in the last couple of years, they [the FWO] been far more proactive than any of their predecessor organisations.” 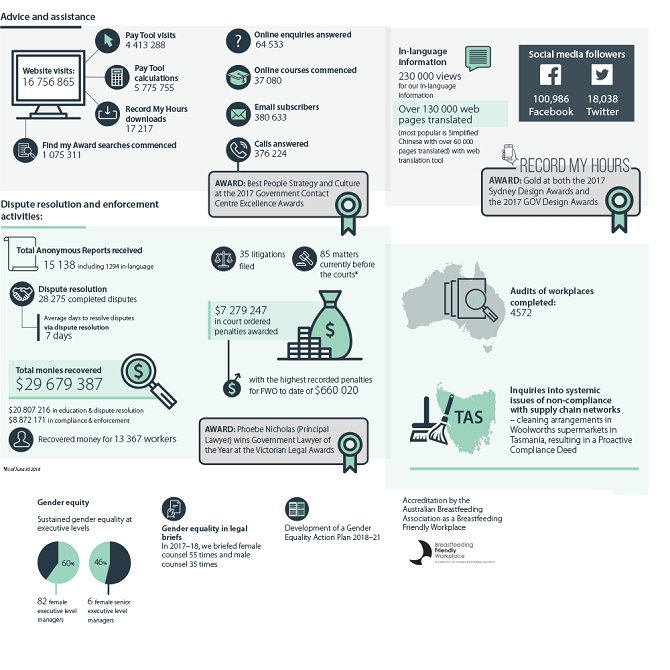 Ombudsman Sandra Parker said the tools her office had developed were designed to be accessible by the widest range of people possible.

“Our services and resources play a key role in building a culture of compliance in Australian workplaces. I look forward to continuing our important work educating employers and employees, protecting vulnerable workers, and improving overall workplace compliance over the next year,” Parker said.