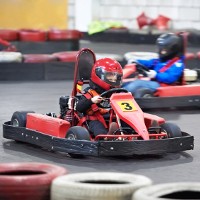 A Perth go-kart company and its director have been fined $30,250 after a young customer had her hair entangled in the cart’s axle.

Wanneroo Kart Hire, which is no longer trading, and its previous director appeared in Joondalup Magistrates Court yesterday over the 2011 incident, according to Perth Now.

The court heard staff had offered a 13-year-old girl a hair net to wear for hygiene purposes, which she was not wearing at the time of the accident, but had failed to advise her to tie her hair back when driving the go-carts.

The girl was driving when her hair became caught in the rear axle of the cart, pulling her back over the seat.

Her helmet was pulled against the brakes on the axle, causing the chin strap to cut into her neck and restrict her breathing.

She passed out, but was quickly cut free, allowing her to regain consciousness.

According to Perth Now, WorkSafe WA commissioner Lex McCulloch said it was pure luck the girl did not suffer lasting injuries and the potential outcomes from that type of accident were horrendous.

After the incident, all go-karts at Wanneroo Kart Hire were fitted with guards between the seats and the ends of the vehicles to prevent loose clothing and hair coming into contact with rear axles.

M+K Lawyers partner Andrew Douglas told SmartCompany under all safety legislation in Australia there is an obligation for a business to provide a safe place for people who enter the premise.

“The standard duty of care is to do everything reasonably practical to avoid a hazard,” says Douglas.

Douglas says businesses have to be able to identify hazards and ascertain risks, measuring both the likelihood of an incident and how serious it would be if it occurred.

He says the law requires business to allocate resources to prevent the risk from occurring.

“Businesses can’t escape liability because of ignorance. The reasonable test is not based on what you know, but what you ought to have known.”

Douglas says if a likely risk is too high and too serious and a business cannot afford to put resources in to eliminate the risk, then a business should close.

Safety law is established on a “hierarchy of controls”, according to Douglas.

The first level of control is to eliminate the risk. In this case, that would be to remove the use of go-karts.

If that can’t be done, the second level of control is physically or otherwise guarding against the risk, or in this case, fitting the go-kart seats with physical guards.

The bottom level of control is administrative: in this case telling the girl to tie her hair back.

“Each step you go down requires a higher level of supervision,” says Douglas.

He says the answer for businesses is to allocate money for supervision of risks and other levels of control.