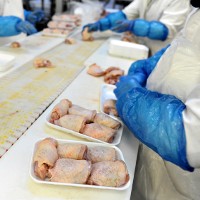 A labour-hire contractor has agreed to pay more than $20,000 back-pay to 10 overseas workers, but the Fair Work Ombudsman has been told the underpayments were just the start of the company’s poor workplace practices.

The company, which the watchdog has not named publicly, hired the workers from Hong Kong and Taiwan to work at a NSW poultry processing plant between May and October 2013.

The workers, aged between 21 and 30, were in Australia on 417 working holiday visas and were sub-contracted to label and pack trays of meat.

They told the Fair Work Ombudsman’s overseas workers team that female workers were paid $11.50 an hour, while males received $12.50 an hour. Workers using the mincer were paid $13.50 an hour.

Shifts lasted between 8 to 16 hours, with some lasting up to 20 hours, and workers were paid in cash, with neither tax nor superannuation deducted.

After an investigation, inspectors found the workers should have been paid between $16.50 and $39 per hour, depending on the shift.

On top of these underpayments, workers told the employment watchdog they were forced to pay $100 a week from their wages to cover compulsory accommodation. They were told they would not receive work if they chose to live elsewhere.

According to the workers, the accommodation was in crowded share houses with up to 30 employees, with two or more people sharing a single mattress in some cases.

The Fair Work Ombudsman has said it has referred its concerns about the company’s other workplace practices to the “relevant authorities”.

The Ombudsman also said it was concerned about sub-contracting arrangements it had discovered through the process of the investigation, including the existence of interrelated sub-contacting companies set up by the contractor.

These sub-contractors were found to have shared the same accountant, interchanged directors, listed individuals as signatories on bank accounts and transferred supervisors from one company to another as labour hire contracts were signed.

Employment lawyer Peter Vitale told SmartCompany this would have raised questions for the Ombudsman over who the actual employer of the workers was.

In terms of the underpayments, Vitale says it appears the employer has simply tried to play a flat rate of pay that is less than what the award requires them to pay.

“Whether or not the fact they were from overseas on holiday might have been a consideration or influence on what the employer was doing is unclear, but it certainly is inferred from the Ombudsman’s statement,” says Vitale.

Vitale says the Fair Work Ombudsman is fairly consistently on the lookout for employers who take advantage of foreign workers and is also looking at the meat industry more generally.

Vitale says the compulsory deductions for accommodation to be lawful they would have to be specifically provided for within an award and could only be done in accordance with the Fair Work Act, which requires deduction to be reasonable and in the best interest of the employee.

“On the surface, it seems it would be difficult to show those deductions were lawful” he says.

“It would be doubtful whether the circumstances of this case would meet requirements of the act.”