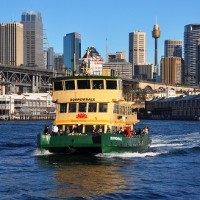 A Sydney ferry driver, who had won his job back after getting the sack for crashing his boat into a wharf and then failing a drug test, has had his reinstatement overturned by the full bench of the Fair Work Commission.

Harbour City Ferries successful appealed an earlier decision by the commission to give ship master Chris Toms back his job after he was found to have smoked marijuana before being involved in a ferry collision with the Cabarita Wharf in July 2013.

In July of this year, Deputy President Lawrence found the dismissal was harsh given Toms’ personal circumstances and determined the sacking was disproportionate to the misconduct of the employer.

Toms had worked on Sydney ferries since 1996 and admitted to smoking marijuana to relieve shoulder pain with his son the night before the accident.

He had not been scheduled to work, but was called in at lunchtime to replace another ferry master who was sick.

When approaching the wharf on July 25, the ferry being driven by Toms veered to the side and hit a metal pile. Upon disembarking at Rydalmere, all passengers appeared unaffected and Toms reported the incident to controlling officers.

Toms completed a drug test later that evening, following which he was suspended.

In July, he argued to the Fair Work Commission the dismissal was unfair because there was “no evidence of impairment” in his performance and given his 17-year history on the job, a one-off incident did not justify dismissal.

An expert witness also said urine drug tests are not the most accurate way to detect cannabis and the amount in his system was unlikely to impact him.

It was also said the ferry master’s specialised skills and experience would make it very difficult to find comparable alternative employment and a lesser disciplinary action should have been taken instead.

Harbour City Ferries argued it had acted appropriately in its action, given its commitment to the safety of the public and other employees.

The company was vindicated on Friday, when Commissioner Johns and senior deputy presidents Drake and Hamberger decided Toms had been in breach of Harbour City’s required drug and alcohol policy.

The court found: “The core issue, the valid reason for termination of Mr Toms’ employment was his deliberate disobedience, as a senior employee, of a significant policy.”

“The only mitigating factor relevant to this issue was the use of marijuana as pain relief. Consequent upon that explanation is the decision to accept a shift while aware of the likelihood of being in breach of the policy,” said the judges.

Employment lawyer Peter Vitale, who called the ruling an “unfortunate decision” at the time, told SmartCompany the full bench saw there were not sufficient mitigating circumstances to reinstate Toms.

“The full bench has decided public safety is a substantial and important matter,” says Vitale.

“Any employee in breach of policies directed to occupational health and safety or public safety matters could only avoid termination for serious misconduct in very exceptional circumstances.”

“It seems the full bench has got to the right outcome. That is why we’ve got appeal rights.”

Steffen Faurby, CEO of Harbour City Ferries, said in a statement the decision by the commission had vindicated his company’s strict policies around drug and alcohol use.

“We are in the business of safety,” said Faurby.

“Tens of thousands of commuters trust us every day to transport them safely around the harbour. It is absolutely imperative that our employees abide by our zero tolerance policy when it comes to drugs and alcohol.”