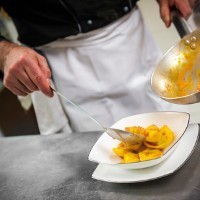 A restaurant in regional Victoria has been slapped with a fine of more than $17,000 for its “disgraceful” treatment of a foreign chef.

Saporitalia, an Italian restaurant in Lorne, has been fined $17,850 by the Federal Circuit Court for underpaying an Israeli-born chef more than $4000 while he was employed there in 2012.

The underpayments occurred in less than a three-month period and also saw the business’ part-owner Yoav Oren stung with a $4590 penalty.

The court also ordered the business owner to pay the Fair Work Ombudsman’s legal costs, which are north of $7000.

The matter was brought to the attention of the Federal Circuit Court after the restaurant failed to comply with the employer watchdog’s orders to back-pay the chef.

Judge Norah Hartnett slammed the restaurant owner while handing down her judgment, saying he had shown no remorse and had “blatant disregard” for workers’ rights under Australian law.

“During the course of the penalty hearing, the second respondent continued to make unfounded allegations against the applicant and Mr Ittah [the chef], including raising matters as to Mr Ittah’s inability to be employed at the present time, and made further criticism of the court and its processes,” she said.

“The second respondent exhibits a blatant disregard of the Australian workplace laws, and contempt for them.”

“The lesson is these protocols and regulations are put in place to protect employer and employee in regards to these types of underpayment matters,” Lock says.

“Sometimes employers do it not really understanding our workplace laws, but we can’t use that as an excuse. So it’s important to ensure that their organisation or company perhaps goes through an audit process to ensure that they are compliant with the Fair Work Act and its regulations.”

Lock says compliance notices are a positive step forward for SMEs dealing with the employee watchdog and it is unfortunate this particular business owner did not take advantage of Fair Work’s goodwill and save himself a lot of time and money by not going to court.

“Small to medium companies don’t have the money to fight these things, so this is why these other alternatives are being offered by the ombudsman,” she says.

Acting Fair Work Ombudsman Michael Campbell said in a statement the ombudsman prefers to settle matters outside of the courts, however, this is not always possible.

“It is important for employers to understand that when a compliance notice is first issued, the Fair Work Ombudsman is simply seeking to recover wages that should have been paid in the first instance – we are not seeking to be punitive,” he said.

“Enforcing compliance notices is fundamental if we are to maintain the integrity of Australia’s workplace laws.”

Campbell also pointed out that overseas workers are particularly vulnerable when businesses do the wrong thing and need to have their workplace rights respected.

“Foreign workers can be vulnerable if they aren’t aware of their workplace rights or are reluctant to seek assistance, so we place a high priority on ensuring they receive their full lawful entitlements.”

SmartCompany contacted Saporitalia but did not receive a response prior to publication.