Small business owner stung with $15,000 fine for pulling the wool over his clients’ eyes 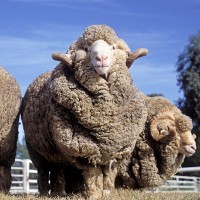 A former wool buyer has been handed a $15,000 penalty in the Melbourne Magistrates Court for deceiving two clients into buying what they thought were 36 bales of pure Merino wool fleece.

Ian Kenneth McLean, who previously operated a company called WAG Trading, pleaded guilty to two counts of obtaining property by deception after he was found to have sold the bales of wool as Merino fleece when in fact the wool was of a lower quality.

Fairfax reports the court heard that McLean had altered the station brands and numbers on the wool bales when selling them to two companies, Techwool Trading and PJ Morris Wool.

The court previously heard the alterations were uncovered when Techwool became suspicious of the wool’s quality. The company requested a further examination, which revealed “extreme differences” in the certificates produced by WAG Trading to verify the wool’s quality.

Both companies are estimated to have lost a total of $58,000 because of McLean’s actions, with McLean making a return of between $3000 and $5000 on the transactions. He has since repaid the money.

The court heard the transactions took place at a time in which McLean was under stress and financial pressure, and he has shown remorse for his actions. He has since lost his company and now works as a handyman.

While the magistrate, Donna Bakos, said McLean’s actions amounted to a serious breach of trust and deterring similar behaviour from others contributed to her sentencing, she decided against imposing a conviction as that would harm McLean’s future employment prospects. She also said she is confident he would not re-offend.

SmartCompany contacted Techwool Trading and PJ Wool but did not receive a response prior to publication. SmartCompany was unable to contact WAG Trading.

Rohan Harris, partner at law firm Russell Kennedy, told SmartCompany this case was prosecuted by the police in a criminal jurisdiction, rather than in the civil jurisdiction for misleading and deceptive conduct.

“The main distinction between criminal charge and a misleading conduct type of claim goes towards the intent of whoever has perpetrated the action and the ability to prove intent was there and present,” Harris says.

“In many cases of misleading and deceptive conduct, often the intent is more difficult to prove and so law enforcement or the police are less inclined to get involved in what is a civil case.”

“Often it is a fine line between a criminal matter and something that is a civil matter between two parties.”

Harris says this appears to be a “clear case of deception and theft” and the parties were able to provide critical evidence of the alterations to the wool bales. And given McLean had repaid money to Techwool Trading and PJ Morris, there may not have been grounds to further pursue a civil action.