A Sydney wine bar says it has been accused of “promoting unsavoury behaviour” because a blackboard listing its selection of wines was too close to the front of the restaurant and did not list any food.

Italian wine bar 10 William Street posted a photo to Instagram over the weekend with a caption that said police said the business’s blackboard, which lists how much its drinks costs per glass, was “antisocial”.

“So according to NSW POLICE FORCE our blackboard with what we are pouring by the glass is promoting unsavoury antisocial behaviour,” the business wrote.

“Sydney, what the fuck is happening.”

The post has since been liked more than 500 times and received more than 200 comments from people furious about how regulators are treating the city’s small businesses.

Numerous restaurants and bars have shut down since the lockout laws came into effect and foot traffic in their areas has declined.

“There is no real crime in running restaurants,” wrote another.

“Police are here to keep us safe and to keep our community flourishing. The police are failing us if the only crime they can find in Kings Cross is a badly written wine list.” 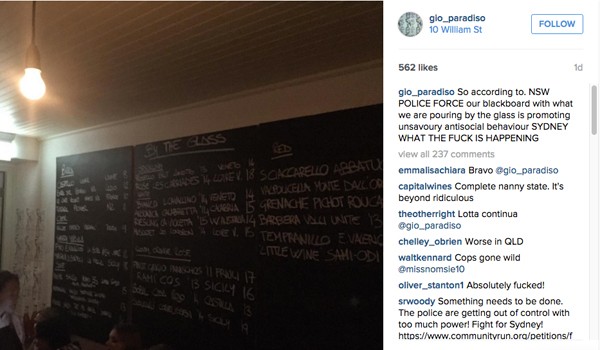 The first was about a sign that included the words “free wine”, which the business says refers to wine without added substances, and the second was the placement of the wine list, which the officers were concerned did not make it clear the venue also served food and therefore could promote heavy drinking.

“We are a wine bar, so we put our wines by the glass at the front, and hand people a menu when they sit down. We’ve had it like this for six years,” Ambrosino said.

In a statement to Broadsheet, NSW Police said 155 businesses and licensed premises were patrolled on Friday and Saturday nights as part of an operation across the Sydney City, Kings Cross, Surry Hills and Newtown areas.

“It is common for police to provide advice to licensees regarding potential licensing breaches or issues during business inspections. Twelve breaches were detected during the operation,” the police said.

“Not safe to operate your business anymore” says Freelancer founder

Speaking to SmartCompany this morning, Barrie said what happened to 10 William Street over the weekend is the latest example of those in power having a “1950s moralistic view of the world”.

“If you are a small business owner in the entertainment, hospitality or even restaurant industries, it’s simply not safe to operate your business anymore under the NSW Liberals.”

Peter Strong, chief executive of the Council of Small Business of Australia, told SmartCompany everyone wants to see an end to alcohol-related violence, but punishing small businesses along the way is not the right way forward.

“The issue here is you don’t stop violence by changing a blackboard menu,” Strong says.

Strong says small businesses in Sydney that are feeling the pinch from the state’s liquor laws should contact their local MP or business group.

“We need to make sure this is done properly,” he says.

SmartCompany contacted 10 William Street but did not receive a response prior to publication.