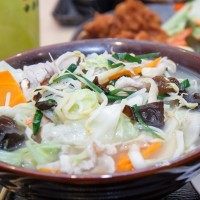 A Tasmanian takeaway restaurant has been slammed with a whopping $100,000 penalty after engaging in “particularly disturbing behaviour” towards one of its chefs.

The owners of Dave’s Noodles, Priscilla Li Peng Lam and David Wing Leong Lam, were each fined $15,000 after admitting a Chinese chef at their restaurant was underpaid more than $80,000.

The business’s parent company, ECFF Pty Ltd, has also been slapped with a $70,000 fine and ordered to rectify the underpayments. So far the chef has only been back-paid $50,000.

The penalties were handed down by the Federal Circuit Court following an investigation by the Fair Work Ombudsman. The investigation found the chef – who was being sponsored to come to Australia on a 457 working visa – was paid flat weekly wages ranging from $804 to $913 between 2008 and 2011 for 38 hours of work.

However, the chef, who is aged in his 40s, was required to work 60 hours a week. This resulted in the business underpaying the chef for his minimum hourly rate, as well as penalty rates for overtime, night, weekend and public holiday work.

In handing down the penalties, Judge Norah Hartnett described the contraventions as “a very substantial underpayment of basic entitlements over an extended period of time”.

Hartnett also found the situation was “significantly aggravated” because the business operators had created false time and wages records in an bid to show the chef had worked 38 hours a week and given these to Fair Work inspectors.

In addition, while the chef is now an Australian citizen, at the time he was considered a “vulnerable person” because of his reliance on his employers to remain in the country.

“The creation of false time and wages records by the respondents was particularly disturbing behaviour, worthy of significant reprimand,” Hartnett said.

“The Fair Work Act itself is a minefield and a minefield for practitioners for a start,” Lock says.

“If it’s like that for us, imagine what it’s like for employers and employees out there. Because we have potentially a change of government every three years, this legislation has the potential to change every three years. So if they [small business owners] are not on top of it, ignorance of the law is no excuse.”

Fair Work Ombudsman Natalie James said in a statement the penalties reflected the court’s concern about businesses underpaying foreign workers – as well as companies attempting to mislead the employment watchdog.

“The small minority of employers who are inclined to contravene the rights of vulnerable workers should be aware that they can face significant financial consequences for such behaviour,” James said.

“Successful litigations such as this also help to create a level playing field for the majority of employers who are committed to doing the right thing by their employees.”

SmartCompany contacted the owners of Dave’s Noodles but did not receive a respond prior to publication.