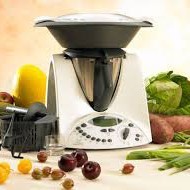 Thermomix customers hand over almost $2000 for the high-tech appliance, but a lack of warning over the introduction of a new model could end up being an expensive mistake for the brand.

Thermomix Australia, the local distributor of the cult kitchen appliance, has been forced to publicly apologise for not letting customers know a new model, the TM5, was coming before its launch last weekend.

Angry customers have flocked to social media to express their outrage, with those who recently purchased the older TM31 model dismayed they were not told by Thermomix consultants a new model was soon to be available.

The TM5, which is being offered at an introductory price of $1989, is billed as being “newer, bigger, better and more digitally advanced” than the TM31, with a touchscreen instead of buttons and a function that remembers your recipes.

The TM31, which has been available for a number of years, also retails for close to $2000, although some users are now offering secondhand TM31 models for a fraction of the retail price via online sites such as eBay.

Close to 2500 people have liked a new Facebook page, Thermomix unhappy customers, which was established in opposition to the company’s actions, while 1900 people have signed a change.org.au petition calling for Thermomix to “address the issues surrounding the misleading way Thermomix AU have handled their customers and provide a fair and satisfactory resolution”.

Angry customers have also flooded the official Thermomix in Australia Facebook page, with many posting about their personal stories of having purchased a TM31 within days of the new model being unveiled without knowing a new model was on the way.

In a statement issued to SmartCompany, Thermomix Australia said it is “deeply sorry that this has resulted in some of our very valuable customers feeling disappointed”.

“The Australian launch of the Thermomix Model 5 on Saturday 6 September was conducted in line with global brand compliance, in accordance with our distribution arrangements which did not allow for any pre-promotion of the new product,” said Thermomix Australia.

“We value every one of our customers and recognise that this is not an ideal situation for everyone involved. We understand the position of our customers that recently purchased a TM31 and are taking this issue very seriously.”

Thermomix Australia said it is working to “address the concerns of those customers that recently purchased a TM31”.

But some Facebook commenters have said they have taken their concerns to the Australian Consumer and Competition Commission, alleging Thermomix Australia mislead consumers.

Hall & Wilcox partner Sally Scott told SmartCompany the test will be whether not telling consumers about a new product constitutes misleading conduct by omission or silence.

“The test is whether in the particular circumstances, the consumer would reasonably expect to be told something,” says Scott.

“If the answer is yes, then the failure to say something could constitute misleading conduct.”

Scott says in the case of Thermomix Australia, the question will be whether consumers would have reasonably expected to have been told about the new model, but the answer to this could go either way.

“If we were talking about the latest iPhone or particular car model, then because of conduct with previous new releases, it would be reasonable for consumers to expect that they would be told before the release,” says Scott.

“Thermomix is a unique product … [and] a premium product I understand it is never discounted. It is also sold by a less common practice.”

“For these reasons, the answer to whether the expectation would be reasonable is far less certain.”

Scott says all businesses must be mindful that misleading conduct can include the failure to say something.

“They need to turn their mind to whether in the particular circumstances, the consumer would reasonably expect to be told something,” she says.