Watchdog calls out Woolies, Aldi for possible code of conduct breaches amid claims they try to “nail suppliers to the floor” 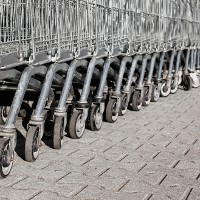 Supermarket giants Woolworths and ALDI have been called out by the Australian Competition and Consumer Commission for their approach to suppliers under the Food and Grocery Code of Conduct.

Small businesses have been urged to keep the supermarket giants in check by educating themselves on their new protections under the code, which aims to ensure better relationships between grocery wholesalers or retailers and their suppliers.

The consumer watchdog said today it is investigating the approach big supermarket retailers are taking to implement the voluntary code, which was introduced in June, after receiving complaints from suppliers.

So far Coles, Woolworths, Aldi and a smaller supermarket chain called About Life have signed up to the code.

ACCC chairman Rod Sims says he has concerns some retailers signed up to the code are presenting inflexible Grocery Supply Agreements (GSA).

“The code imposes a duty to deal with suppliers in good faith and we are concerned by reports we have received from suppliers that suggest that some retailers have not got off to a good start when it comes to implementing the code,” he says.

“The ACCC has concerns as to the manner in which some retailers, in particular Woolworths and Aldi, are presenting new Grocery Supply Agreements, which might give the impression that the supplier is not able to negotiate the terms of the GSA.”

It follows comments by ACCC Deputy Chair Dr Michael Schaper last month, who told SmartCompany the code is important because there had been “far too many instances of large firms racing to the bottom” when it came to their competitiveness in the large scale retail market.

A spokesperson for ALDI told SmartCompany today it respects the “role of the ACCC in maintaining a fair and complaint food and grocery industry, and will respond in due course to the specific claims that have been brought to our attention”.

The spokesperson says ALDI had “long been recognised for its excellent relationships with suppliers”.

“ALDI’s commitment to sign and implement the Food and Grocery Code 2015 (Code) before any other major supermarket is testament to our business values and dedication to quality supplier relationships,” the spokesperson says.

“The spirit of the Code reflects ALDI’s current practice with suppliers; forging long-term, sustainable relationships and working in partnership to provide Australian shoppers with high-quality products at permanently low prices.”

Jos de Bruin, chief executive of Master Grocers Australia, told SmartCompany today the intention of code of conduct is about “exactly that, it’s about behaviour”.

“It’s about the respect any large organisation or retailer should show towards its suppliers,” he says.

“Whether it’s farmers, manufacturers or on-sellers… it is a basic code of conduct which needs to be engaged with in order to do business in a fair manner.”

De Bruin says the reason the code was put together is to do with the unconscionable conduct some of the major supermarkets had been known to direct towards suppliers in the past.

“Large companies should not be in the business of putting people out of business or threatening suppliers,” he says.

De Bruin says he believes Woolworths and Aldi are “wanting to nail their suppliers to the floor” when it comes to committing to GSAs.

“Where is the negotiating, where is the understanding of others’ businesses,” he says.

“I think the large players, Woolworths and Aldi, are going beyond the pale.”

De Bruin welcomed the ACCC’s decision to question the retailers about the code so early into its introduction.

“It’s their remit to preside over the code, when you opt into the code it’s compulsory,” he says.

“I think the ACCC is doing the right thing by consumers, grocers and the national interest.

“We as Australians should not accept unconscionable conduct.”

De Bruin says it is “more evidence of these businesses trying to push suppliers to limits”.

“They have always pushed boundaries and are very close to that boundary of behaving unethically and inappropriately,” he says.

“That’s the warning the ACCC are putting out today.”

In a statement provided to SmartCompany, a spokesperson for Woolworths said the supermarket is a strong supporter of the grocery code and was “surprised and disappointed” with the ACCC, which had “failed to recognise our prompt actions some weeks ago”.

“We were the first national retailer to commit to sign up to the code and have been working progressively with our suppliers since then to implement it,” the spokesman said.

“A minor wording issue was raised with us in relation to a letter sent to a number of our suppliers offering to amend agreements to… comply with the grocery code.”

The spokesperson said the wording issue in question has been used in letters to suppliers “for many years” and was designed to “avoid changes to agreements being missed or misunderstood”.

“Wanting to deal with this issue promptly, two weeks ago we changed the paragraph in the relevant letter,” the spokesman said.

The supermarket considered the code process had “worked exactly as it was intended to”.

“We engaged quickly and constructively with the AFGC, the ACCC and our suppliers on this issue,” the spokesman said.

*SmartCompany updated the story at 4.51pm on September 24 to reflect comments supplied by Woolworths.