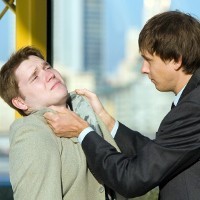 A mining site worker in the Pilbara who held a piece of broken glass to the throat of his co-worker has lost his unfair dismissal claim before the Fair Work Commission, after he argued his actions were just part of the “boys being boys” culture of a mine site.

Fortescue Metals Group fired Perth man Adam Rouse on December 18, 2014, following an incident where he and some co-workers were enjoying a drink outside of work hours.

Rouse, who represented himself before the commission, told Fair Work that the incident occurred when he left the table where he was sitting and a glass bottle smashed at his feet.

Distressed that someone would show such a lack of concern for his safety, Rouse said he picked up part of the smashed bottle, returned to the group and said, “Who the fuck threw that?”

One of the workers put up his hand and admitted throwing the bottle, prompting Rouse to hold the piece of glass to the worker’s neck.

He then said, “Do you know what I do to people who throw bottles at me in Perth? If you did that in Perth I’d cut your tongue out.”

The worker’s neck started to bleed, which Rouse described to the commission as, “small scratches [that] were no bigger than a shaving cut”. Rouse said he let the worker go after he realised he had hurt him.

Rouse told Commissioner Gooley he considered his comments a statement of fact and not a threat and believed his dismissal unfair because the worker who threw the bottle only received a warning.

Rouse argued his comments were not unusual for a mine site, saying what would be considered violence in mainstream society is just “boys being boys” on a mine site.

But Gooley rejected the argument, finding Rouse had acted disproportionately and not in self-defence.

“Mr Rouse in that situation had a number of options. However, none of those options involved taking a broken piece of glass and holding it at the other worker’s neck and threatening the other worker,” said Gooley.

“I do not accept Mr Rouse’s ‘things are different on a mining site’ defence. This conduct is unacceptable anywhere,” the commissioner continued.

“Mr Rouse had other options but he did not use them. Mr Rouse could have made his feelings about the incident clear without making threatening statements whilst holding a piece of glass to the other worker’s neck,” said Gooley.

Gooley rejected Rouse’s application for unfair dismissal, which was also not filed within the 21-day application period, finding there were no exceptional circumstances to grant an extension of that time to move forward with the case.

Employment lawyer and principal at M+K Lawyers, Andrew Douglas, told SmartCompany Rouse’s “boys being boys” argument did not detract from the seriousness of his actions.

“Commissioner Gooley said it doesn’t matter about the particular cultural differences in a workplace, when you threaten someone with a broken bottle, draw blood and make threatening comments, there is no reasonable chance of success,” says Douglas.

While Douglas says employers can run the risk of undermining a dismissal if they fail to follow the appropriate processes after a violent threat takes place, a large company like Fortescue would likely have the correct policies and procedures in place.

“Violence is never acceptable and that is certainly something you need to tell employees very clearly in their induction and reinforced in training,” he says.

Douglas says such policies are particularly important in industries where there is an inclination towards roughhousing and warns that employers risk undermining themselves if they are seen to condone such culture.

“Allowing roughhousing is the thin end of the wedge. A good culture is where people feel safe and respected. If you allow bad behaviour to occur and say it’s just the culture, you compromise yourself.”

SmartCompany contacted Fortescue Metals Group but did not receive a response prior to publication.