Where should you invest time and money? With finite resources and infinite choices, that seems to be one of the biggest challenges in business.

But perhaps a bigger challenge is deciding where not to invest your resources. Saying no to initiatives is the harder thing to do, and is why too many businesses over-promise and under-deliver. Let’s change that.

Imagine yourself in a boardroom. You, your boss and your colleagues have just been through a prioritisation exercise. You’ve nominated all the possible initiatives for the year ahead and assessed them for effort required vs. value generated.

Perhaps you’ve plotted each initiative on something like this prioritisation quadrant in Figure 1? 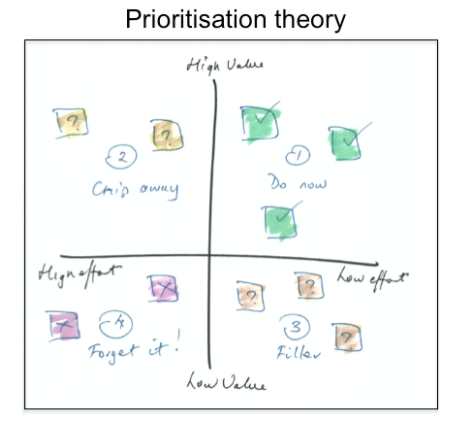 The idea is to prioritise the high-value, low-effort initiatives (quadrant 1) and forget about those with high effort, low value (quadrant 4). High-value, high-effort tasks you can choose to chip away at (quadrant 2), while low-effort, low-value tasks (quadrant 3) can slot in when there is any downtime.

The problem is most businesses end up with something more like Figure 2 below: too many priorities to deal with. 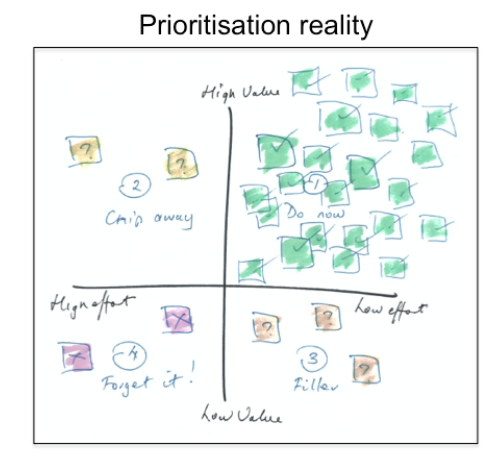 This is the “eyes too big for their belly” problem. Everything but the most inane projects becomes important, staff get exhausted before they’ve even began and you’ve set yourselves up for failure because everyone is spread too thin. All because we don’t want to say no.

Why we end up with too many priorities

If you end up with too many priorities it’s usually a function of the following.

Two aspects of organisational politics exacerbate over-prioritisation. The first is leadership. If your boss proclaims everything a priority, it can be a “career limiting move” to challenge them.

The second is status. People will champion projects that impact their standing in the organisation. If their business unit is not represented as a priority, for example, it makes them feel vulnerable. It is also often the case that some areas of the business become perennial priorities (e.g. sales), which demotivates other lines of business.

The “toothbrush principle” holds that everyone likes ideas, just like they like toothbrushes, but that doesn’t mean they want to use anyone else’s. When it comes to prioritisation, people will naturally pay more attention to, and take greater ownership of, their own initiatives. This not only makes it more difficult for them to de-prioritise something in which they are emotionally invested, it also means they may not really be paying attention to other projects, failing to challenge the inclusion of some initiatives because it’s outside their purview.

The planning fallacy is our tendency to underestimate the time it will take to complete a project, even if we compare it with similar projects. Our over-optimism means we will fail to take into account likely delays or obstacles. This leads to overcommitting the business to too many projects based on unrealistic expectations.

Saying no to a project can be psychologically painful because it can feel like you are losing its potential benefits rather than gaining capacity to focus on other initiatives. We fail to see the opportunity cost of what taking on another task means.

How to make de-prioritisation a priority

To change prioritisation requires we approach it as a behaviour change exercise, and that means anticipating barriers to doing things differently.

First, get clear on the current and desired behaviours.

Then look at each of the three barriers to change.

Apathy: Get them invested in the practice of fewer priorities

With apathy, the central problem is it feels easier to include more priorities rather than less. We need to punctuate this “path of least resistance” thinking by highlighting the downside of such apathetic behaviour. Table the organisation’s previous poor track record of completing a long list of priorities, for instance, or share this study on how company revenue growth declined relative to peers once the executive team’s priority list grew.

In the thick of a prioritisation process, you might also like to try the following exercise. Give people $100 in physical currency that they can put against any of the ideas. It will remind them that real money is at stake with these decisions, force them to place their bets and shift them from abstract to concrete (I’ve seen this done with stickers, but it lacks the psychological connection with money).

Paralysis: Clarify the priorities so similar items can be consolidated

There’s something comfortable about having a long list of priorities — it makes us feel we’ve covered all bases. However, when it comes time to manage them – including scoping, measuring, reporting, let alone doing – it can feel overwhelming. Don’t forget, every employee, every day will be grappling with where they should spend their time. The more options they have to contemplate, the more time they waste in decision rather than doing mode.

The answer lies in clarifying the ideas up front, and consolidating where you can to reduce the sheer number you have to juggle.

One idea is to set a hard limit upfront (e.g. five priorities) to force some decisions. Another is to use a prioritisation matrix (see below) that encourages only the ideas in the very top right to be prioritised. The smaller you make the cut-off line, the fewer ideas will be made a priority (this is an example of using your decision-making environment to nudge behaviour). 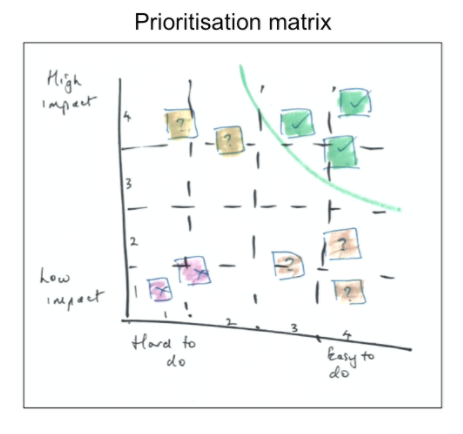 Fear of not being represented on the list, of missing good ideas, of not contributing ideas, of getting people offside by not supporting their ideas or looking like you are not crazy-busy can create over-commitment. There are two strategies to employ when addressing fear: give people nothing to fear by de-prioritising ideas and something to fear if they end up with too many.

I’ve only scratched the surface on some solutions to changing the behaviour of your organisation. For it to be most meaningful requires delving into the players and culture involved, which is something you are well placed to do. Let me know if you would like some support in tackling the thorny but vital issue of prioritisation.

NOW READ: Why we prioritise urgency over importance

From living room floor to $227 million listing: How Airtasker got to where it is today

Entrepreneurs, Startup News
Stephanie Palmer-Derrien
Airtasker is gearing up to list on the Australian Stock Exchange later this month, nine years after its first raise. Here's how it got there.