A conversation with Tony Abbott after six months in power 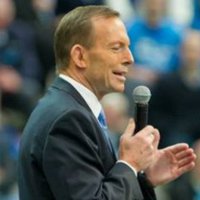 Tony Abbott has been in office six months, and this week marks 20 years since he was elected to parliament. On Thursday he sat down with The Conversation in his Parliament House office to talk about settling in to the most demanding job in the nation’s political life.

Abbott admits being prime minister is fatiguing but with six hours sleep a night “I can survive indefinitely”. It’s a “very collegial” and “like-minded” government, despite some senior members being in a “slightly different philosophical space to mine”. “The outliers are not very far away from the mainstream,” he adds. His cabinet often makes changes to items coming to it – “that’s what cabinet government is all about”.

He expresses confidence that his one ministerial casualty, Arthur Sinodinos, who has stood aside because he’s before ICAC, will come through – “I will be amazed if any significant adverse finding is made against him”.

He canvasses his formal and informal advice networks, and mounts a spirited defence of his controversial chief of staff, Peta Credlin. Discussing the accelerated political process, he says anonymous social media can be much more vitriolic and extreme than “normal media”, likening it to “electronic graffiti”.

Abbott explains his failure to take his surprise “knights and dames” initiative to cabinet and the party room by saying this was a matter between him and the Queen.

On proposed changes to the Racial Discrimination Act, he says the government is not “impervious to a further argument”.

Looking to the new post-July 1 Senate, he promises the government will keep the crossbenchers “very much in the loop” as it tries to get its bills through.

And what has he really, really enjoyed in the job? “The contact with the military at every level.”

The interview started on the subject of whether a PM can have a life apart from the job.

Michelle Grattan: How are you managing the work-life balance?

So I’m not really managing the work-life balance, I’m just accepting that the work increases and the ordinary life has to decrease when you’re the prime minister.

Michelle Grattan: You did try to hang on to a few things. Have you given that up?

Tony Abbott: I haven’t, but inevitably the space for “self time” decreases even further when you become PM and that’s just the way it is. I’m not complaining, it’s just a fact of life.

Michelle Grattan: Have you hung on to anything?

Tony Abbott: I’m still getting my exercise at five o’clock in the morning, that’s good. So far I’ve managed to hold on to a bike ride on Saturday or Sunday morning, probably at least two weekends out of three. But there has been bugger-all surfing since the election. For the first half of January I got a surf in most days, but that’s really the only surfing there’s been since the election.

Michelle Grattan: And the fire brigade?

Tony Abbott: I got one night and one day with the brigade up in those Blue Mountain fires in October and I think I’ve done two duty days since then. So just enough to stay an efficient firefighter and I’ll try to get another Sunday in some time between now and the budget.

Michelle Grattan: Are you still in your Sydney house?

Michelle Grattan: Are you going to stay there?

Tony Abbott: Look, the security people are anxious, but there has been no definitive decision made. That one’s still being weighed.

Michelle Grattan: How different is the prime minister’s job from what you expected?

It is a very heavy responsibility to make, but someone has to make it for our country and I am thrilled and honoured to have that opportunity and that responsibility.

Michelle Grattan: I’ve heard it said that you believe the political process has speeded up considerably since the Howard days. Do you think the PM’s job has changed since those days?

The thing about social media is that it is anonymous, so it can be much more vitriolic and extreme than normal media and yet it is there for everyone to see. It is kind of like electronic graffiti. The political process is accelerated and intense in a way that I don’t believe it ever really has been before.

Tony Abbott: It is just an added element of pressure, that’s all.

That doesn’t mean there aren’t periods during the day when you don’t start to feel like the odd yawn, but nevertheless I find I can go through the day till about ten o’clock pretty comfortably.

Michelle Grattan: How would you rate your start in the job?

Michelle Grattan: When we spoke before the election, you said the prime minister should be somewhat more than first among equals, but leave a lot to his ministers. Now you’re in the position do you still think this is the appropriate formula?

Tony Abbott: I do. There are some issues where ministers should come and talk to the prime minister, if the prime minister hasn’t already talked to them. Any issue which a minister thinks is going to be profoundly controversial, where we do not have a clear existing position, it is important that there be a conversation between the minister and the prime minister. I think they all understand that and I think it is working very well.

Michelle Grattan: Have you had to intervene with ministers more than you expected?

Tony Abbott: No. It’s a very collegial government. The media – and I’m not blaming them – obviously like to seize on the differences between people and, sure, there are some senior members of the government who are in a slightly different philosophical space to mine. But do not underestimate the substantial single-mindedness of this government.

We are a very like-minded group, the senior members of this government. The outliers are not very far away from the mainstream.

Michelle Grattan: How difficult for you personally was the Sinodinos affair?

Tony Abbott: I have a lot of respect for Arthur. I’ve known Arthur for a very long time. I’ve worked closely with him over a very long period of time. Arthur is a fundamentally decent man and I will be amazed if any significant adverse finding is made against him.

Arthur is also a tough political professional and he realised that it was going to be difficult for the government if he simply toughed it out and that’s why he came to tell me what he told me.