“A real burden to small businesses”: Abetz backs down on 40 job applications plan 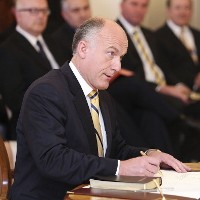 Employment Minister Eric Abetz has backed down on the federal government’s plan to force job seekers to apply for 40 jobs a month, saying he recognises criticism the move would be a “real burden to small businesses”.

“It is clear that, overwhelmingly, people say that if you’re unemployed, your full-time job should be job seeking,” Abetz said.

“On the other side, there is the view – and I think it’s a legitimate view – that getting people to apply for 40 jobs in a meaningless way will achieve no purpose and, what’s more, be a real burden to small businesses, especially in regional areas.”

“So, we are factoring in all that community feedback.”

The draft policy, which would have forced jobseekers to apply for 40 jobs a month and perform up to 25 hours of community service, has copped considerable flak from small business, job seekers and the opposition since its release last month.

An app was even created by a job seeker with the intention of spamming Senator Abetz, potentially copying him into tens of thousands of job applications daily in order to demonstrate the flaws of the policy.

The program was estimated to cost $5.1 billion.

A spokesperson for Abetz told SmartCompany this morning a decision was yet to be made on the policy, as the consultation process had only just ended, however the Minister is considering the “overwhelming feedback” that 40 job applications a month was too much.

The spokesperson says Abetz’s comments were consistent with his previous statement the policy would be formed through a consultation process with the community.

“Feedback has shown the process is too much red tape for business and the government is listening,” says the spokesperson.

Peter Strong, executive director of the Council of Small Business of Australia, told SmartCompany he supports the move by Abetz to take heed of feedback from small business.

“Good on him, he’s listened and he’s heard and he’s responded. You can’t ask for much more than that,” says Strong.

“However, maybe there should have been consultation before,” says Strong.

“I would say [to the Minister], please, please have the department talk to us in the future.”