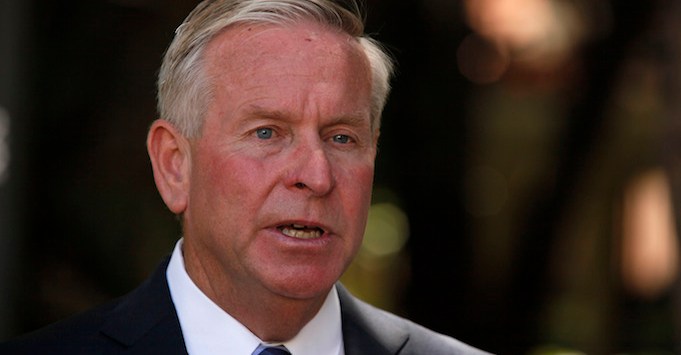 The past four years have not been kind to Western Australia. Coming off a once-in-a-lifetime boom, the bust, which for some reason the state always forgets to anticipate, is cutting deep, and it’s proving a problem for the Barnett-led Coalition government.

Treasury’s pre-election financial projections statement has growth for the financial year dropping from 1% to 0.5%.

While the current and next financial year budgets are expected to have smaller deficits than projected, primarily due to a three-year high in iron ore prices, state debt is expected to reach $41.1 billion in 2020. Treasury does not foresee an operating surplus in the forward estimates period.

Population growth, driven by interstate and international migration, has fallen from 4% a year in 2012 to just over 1%.

Job uncertainty is a major issue. WA now has the highest unemployment level in the country, at 6.5% in January, although the rate has dropped by 0.2% since November 2016.

Many Western Australians are now fearful of losing their jobs while having to maintain large mortgages. This is in a climate in which the median value of a house in Perth has fallen back to 2013 levels, down 2.3% in 2016.

It’s worse in some remote parts of the state, where property prices have dropped by up to 75% over the last three years.

For those who have maintained their jobs, many are still in a worse financial position as bonuses and other financial incentives from the boom dry up. Others managing to find employment now have reduced salaries.

The public education system has increased its share of the students in each of the last five years. Part of this rise has been attributed to the downturn in the economy, as people divert money from school fees to the mortgage and other essentials. This in turn adds costs to the state budget.

Who’s responsible for this situation?

During his two terms, Premier Colin Barnett has projected the image of a leader in control. Treasurers have come and gone, and most ministers have minimal presence in the media. Barnett is the face of the government, and he bares the brunt of a scared and angry population, wondering what happened to his 2009 promise of a 20-year boom with growth of 5-7% a year.

At the time of the 2013 leaders’ debate, state debt was around $18 billion, but Barnett insisted the rate of increase would not be maintained. Instead, over the last four years, the debt has risen by around $15 billion.

In August 2014, the state lost its AAA credit rating. In February 2016, Moody’s further downgraded the rating from AA1 to AA2.

During the recent leaders’ debate on February 22, Barnett pointed to his government’s investment in schools and health, with construction of the Fiona Stanley and new Perth Children’s hospitals. The latter has yet to open and is now more than a year behind schedule.

Part of the reason for the government’s high debt levels are investments in Perth infrastructure, such as a new stadium, which will open in 2018, Elizabeth Quay and the sinking of the railway line and bus station in Northbridge.

While of long-term benefit to the city, the last two projects are releasing inner-city land for development at a time when office vacancies are at 30% with retail vacancies at a similar level.

Without funds to play with, promises are limited. Barnett is arguing that his government is a strong pair of hands for these hard times.

There are two significant issues separating the Labor and Liberal parties at this election.

The first is the privatisation of Western Power, which the government will use to pay off part of the state’s debt.

Labor leader Mark McGowan is running an old-fashioned scare campaign claiming prices will rise if the monopoly is sold. Energy prices have long been contentious in Western Australia, with the Barnett government overseeing a 67% price increase for households since 2009, admittedly off an artificially low base. McGowan is arguing the state should not sell off a revenue-generating monopoly to deal with the debt.

The second issue is public transport. The Barnett government has broken promises to deliver improved services to the outer suburbs of Perth, in places such as Ellenbrook.

Labor has resurrected its highly popular Metronet rail plan from the last election. Federal leader Bill Shorten is promising to help fund the plan should Labor return to government at the national level.

The costs of Metronet appear rubbery at the moment, but WA Labor is also planning to divert federal funding from the controversial Roe 8 highway.

While Prime Minister Malcolm Turnbull has stated the Commonwealth will not allow the diversion of funds, McGowan is pointing to the success of the Victorian Labor government in cancelling the East-West Link and using the funding for other projects.

WA is also seeing an increase in crime, some of which is linked to the so-called ice epidemic. Both parties are promising to be tough on crime. The Liberals are promising mandatory sentencing and Labor is advocating a maximum sentence of life for meth dealers.

During his blink-and-you-miss-it trip west, Turnbull disappointed Liberals with his lack of a plan to provide WA with its fair share of GST. Barnett has been campaigning on this issue for years, and the claimed $4.7 billion annual shortfall in funds would help with the budget deficit.

Just how big is the swing to Labor?

There are 59 seats in the Legislative Assembly. The Liberals go into the election holding 30 seats and the Nationals seven, for a total of 37. Labor holds 21 seats. There’s one independent, former Liberal minister Rob Johnson.

In the 2015 electoral boundary redistribution, the Liberals notionally gained a seat from Labor.

To win government, Labor needs to win 10 seats, with a uniform swing of around 10%.

Polling has been somewhat inconsistent. A ReachTEL poll for The West Australian on February 19 showed a two-party-preferred (TPP) result of 50-50. The two previous polls had Labor at 52-48 on TPP.

On February 23, The West published a private poll of marginal seats funded by advocacy group, The Parenthood, again conducted by ReachTEL. The West noted a surge to Labor, with all six seats polled (Southern River, Perth, Mt Lawley, Wanneroo, Joondalup and Bicton) predicted to fall with an average TPP swing of 15%.

A swing of this magnitude would deliver a decisive Labor victory, with the party winning 41 seats.

Fairfax commissioned a ReachTEL poll published on March 3, in which Labor had a 52-48 lead on the TPP vote. The swing of 9% suggests Labor could fall one seat short in its bid to gain government.

How important are One Nation Preferences?

From a purely pragmatic viewpoint, Barnett’s preference deal with One Nation is a legitimate gamble. His unpopular government is facing electoral defeat and with One Nation’s fortunes on the rise again in WA, shoring up the two party preferred vote is essential.

There are risks in the deal. The first question put to the premier by the panel at the leaders’ debate focused on how a man with integrity could engage in a “dirty preference deal”. While One Nation may have become more politically savvy, the party’s distasteful views remain and trying to suggest the party reflects mainstream opinion is disingenuous.

Barnett risks losing preferences from Nationals who are outraged at being placed behind One Nation in the Legislative Council, Greens who won’t direct their preferences on principle, and moderate Liberals protesting the deal.

The flow of preferences from One Nation supporters isn’t guaranteed either. Despite Pauline Hanson’s “it’s my party, I am the leader and I make the deals” position, a number of WA One Nation candidates are unhappy. Two were disendorsed — although it is unclear how large a role their position on the preference deal played.

A week out, the bookmakers have Labor at $1.30 and the Coalition at $3.40. The betting would suggest that WA is about to have a change of government.

Natalie Mast is an associate director at Business Intelligence & Analytics, at the University of Western Australia.

Oh you little twat.More Political Savvy?? You will see a One Nation Prime Minister within 10 Years .People are choosing Oner Nation because we are sick and tired of people like you(Mainstream Media & Government) Not Listening.Our opinions and beliefs are deemed unworthy or some passing fase.You would go well not to try using an Unbiased approach to your journalism.Or you may get labeled with the fake News crew when Pauline is PM.BREXIT,DONALD TRUMP,PAULINE HANSON,see the pattern? 😉

Have to agree partially with Nathan. I spend a lot of time studying political movement and if it’s not One Nation it will be someone else. But the Trump train is live and well, across Europe and now in Oz. All those who refuse to see it and who continue to carry on as they have in the past will be left behind as irrelevant. Enjoy the unemployment line , you bloody well deserve it for you’re arrogance and ignorance whilst calling us all sorts of names. Left wingers, the PC lunatics and the Ultra greed Ultra right, are all going down. Here comes the Trump train! Ignore it at you’re own peril.