“Bastards” and “mongrels”: What will Clive Palmer’s anti-China crusade mean for your SME? 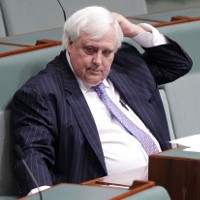 Billionaire Clive Palmer has come under attack from Australian political leaders and the Chinese embassy in Australia for labelling the Chinese government “bastards” and “mongrels” who “shoot their own people”.

The mining-magnate-turned-politician, who made the remarks on Monday’s episode of Q&A on ABC-TV, has come under fire from Treasurer Joe Hockey, Foreign Minister Julie Bishop and West Australian Premier Colin Barnett over the comments, which were labelled as “full of ignorance and prejudice” by a spokesperson for the Chinese embassy in Australia, who spoke to the ABC.

While Palmer issued a statement today clarifying the remarks, which he says “were not directed at the Chinese community or the Chinese government” but at “one Chinese state-owned company that has failed to honour its agreements and announcements made to the Hong Kong Stock Exchange in early 2006”, could there be a fall-out that will affect the business interests of Australian companies in China?

Bryan Clark, director of trade and international affairs at the Australian Chamber of Commerce and Industry, told SmartCompany Palmer’s comments are “certainly not helpful”.

“[Palmer] may have some particular views about the commercial relationships his own company has been involved in, but that shouldn’t reflect on our wider relationship with China,” says Clark.

Clark says he is hopeful the comments will be interpreted by the Chinese business community as “a reflection of an individual relationship” instead of representing wider views in the Australian business community.

“China is one of our most important trading partners [and] it’s really important we display friendship and welcomeness,” he says.

Morry Morgan, co-founder of training consultancy ClarkMorgan and author of Selling Big to China, told SmartCompany the impact of Palmer’s comments will depend on whether or not the comments travel the “information gulf” between Australia and China.

Morgan, who has been in China since the start of the week, has not seen any reporting of the comments within the country and says, on average, Chinese consumers are less engaged with politics than Australian consumers.

Morgan says he suspects the comments will do more harm to Palmer personally, given the billionaire has family in China and continues to travel to the country on a regular basis.

“It’s all about perceptions. If they don’t have any idea about the comments, it might be an indication that he is just shouting in his own bedroom,” says Morgan.

“Palmer isn’t part of the ruling government, he is from a very minor party and a young minor party at that, so the comments may not even make any noise at all.”

Morgan says the comments may be doing the rounds on Facebook and Twitter in Australia, it’s important to remember those social media platforms are not used by Chinese individuals.

As a consequence, Morgan says for the comments to gain traction on Chinese social media platforms such as Weibo, an individual would have to manually copy and paste the remarks and “physically move them over the information gulf”.

Morgan says individual social media users in China can also face penalties from the government, including jail time, if they are found to be spreading “rumours” on social media platforms.

“This could have shut down the debate automatically if the comments were seen as a rumour,” he says.

“So the saving grace, ironically, could be the Chinese government’s own heavy hand, which is what Palmer was commenting on.”