Australian small businesses have been given 12 more months to take advantage of the federal government’s instant asset write-off scheme.

It’s a small win for small businesses, which have embraced the scheme since it was first introduced in the 2015 budget.

But the announcement will also no doubt disappoint those in the small business community who hoped to see the scheme become a permanent feature of the tax system.

In a pre-budget poll of SmartCompany readers, 60% said they were hoping the government would make the scheme permanent. Meanwhile, Peter Strong, chief executive of the Council of Small Business of Australia, told SmartCompany his members say “time and time again” how well-used the scheme is.

But Strong admitted in March he finds it challenging that every year, the small business community has to argue for a policy that has widespread appeal. 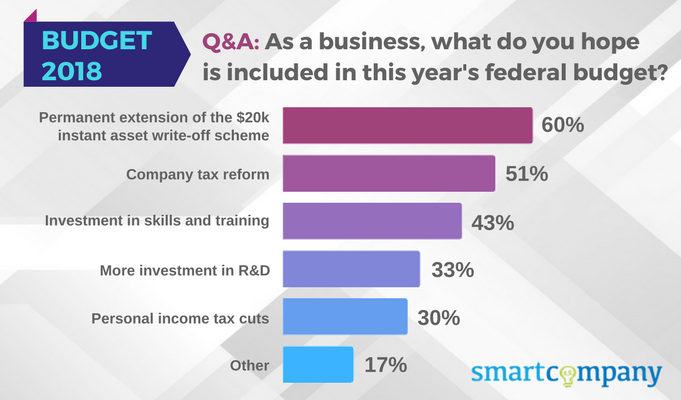 At the time, Treasurer Scott Morrison said the scheme had achieved the “desired effect”. “I like doing things that have the desired effect,” he added.

The extension of the scheme is projected to cost the budget bottom line $350 million over the forward estimates, with the majority of the hit to come in 2019—20, when the cost to the budget will be $550 million. In the following two years, the measure will deliver $200 million to the government’s coffers.

In the budget papers, the government said the additional 12 months of the scheme will “improve cash flow for small businesses, providing a boost to small business activity and investment for another year”.

The scheme allows small businesses to claim immediate deductions for asset purchases up to the value of $20,000. The assets must be ready for use by June 30, 2019.

When it was first introduced, it initially applied only to businesses turning over up to $2 million annually. This threshold was extended to $10 million in annual turnover after the Senate approved the first phase of the government’s enterprise tax plan in 2017.

According to Treasury data, in the scheme’s first year of operation, 99,000 businesses took advantage of the write-offs, claiming a total of $415 million, up from $165 million claimed in write-downs before the scheme was introduced.

In October 2017, then Small Business Minister Michael McCormack said more recent data showed another 50,500 businesses used the scheme in its second year. The average amount claimed increased from $4000 to $9000.