Budget 2018: Wins few and far between for small businesses

In his budget speech tonight, Treasurer Scott Morrison will outline five things the government needs to do to strengthen the Australian economy.

It is no surprise tax relief for individuals is at the top of Morrison’s list; it’s been a consistent theme throughout the (admittedly few) pre-budget leaks this year.

Second on the Treasurer’s list is to “keep backing business to invest and create more jobs, especially small and medium sized business”.

That SMEs are listed ahead of the government’s other priorities – guaranteeing essential services, keeping Australia safe and ensuring government lives within its means – suggests this important sector of the economy is front of mind for Morrison and his colleagues.

But reading the 2018 budget papers, it’s hard not to feel somewhat underwhelmed.

Much of what is in the budget for small business is a continuation of positions taken in previous years; the government’s work on tackling illegal phoenixing activity has been well-documented, as have the many facets of its quest to deal with the “black economy”.

Even the extension of the $20,000 instant asset write-off scheme – which will no doubt be welcomed by the small business community, as it should be – is a policy that has been around since 2015.

And it seems the calls from the community to make the scheme a permanent feature of the tax system have fallen on deaf ears.

Gone too is the rhetoric of the past few years that small business is the “backbone of the economy”.

There will be Australian businesses that directly benefit from changes to the R&D tax incentive scheme – those with more than $20 million a year in revenue that invest in R&D stand to win – but there will be a cap for the smaller end of town.

The government will be putting up more funding to help older Australians work longer or employ themselves, and that’s a good thing – for those workers and for the businesses they will bring their skills and knowledge to.

Likewise, it’s encouraging to see funds set aside for focused export hubs to encourage the global ambitions of SMEs as part of the “Australian Technology and Science Growth Plan”.

The question is: are these changes enough?

Are they enough to make a real difference to the day-to-day lives of the more than 2.2 million small businesses operating in Australia? Or to the 4.7 million people they employ?

With the next election now in sight, are they enough to convince small business owners and operators (read: voters) that the government really is backing them?

When we asked small businesses what they were hoping for in the lead-up to this year’s budget, it became clear that many were simply uninterested in the outcome.

Perhaps they were right on the money.

What do you think of Budget 2018? Tell us in the comments below. 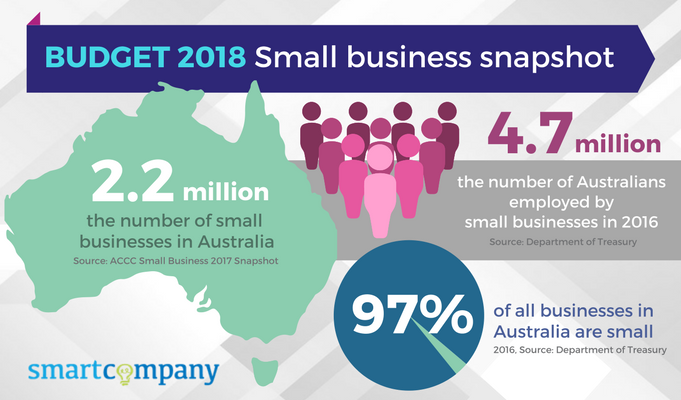 NOW READ: What do SMEs want to see in Budget 2018? Here’s their wish list