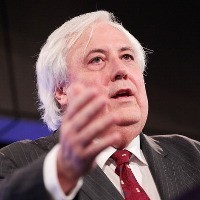 Mining-magnate-turned politician Clive Palmer has launched an attack on the federal government for “duping” small businesses into believing the government is assisting them, when in fact it is winding them up.

Palmer based his claims on statistics revealed by SmartCompany earlier this week that showed the Australian Tax Office applied to wind-up 556 companies in May.

“This figure represents 77% of all wind-ups in Australia and is twice as many as July 2014, making the government the largest petitioner of bankruptcy in Australia,” Palmer said in a statement to SmartCompany this afternoon.

“The government has dropped the threshold level for winding up businesses from $300,000 to $30,000. They are closing the doors on businesses before the business is given the opportunity to make money.”

The ATO has previously told SmartCompany the increased number of wind-up applications is “not a crackdown”.

Palmer questioned if the government is “really supporting small business”.

His attack comes after on the same day the first of the government’s small business budget measures passed through the House of Representatives.

The $20,000 asset write-off scheme will now be voted on by the Senate later this month.

But Palmer said if the government is “truly committed to helping small businesses” it would introduce a Chapter 11-like system of bankruptcy protection, similar to the system that operates in the United States.

“This would not only help to save many struggling businesses but would also save jobs.”