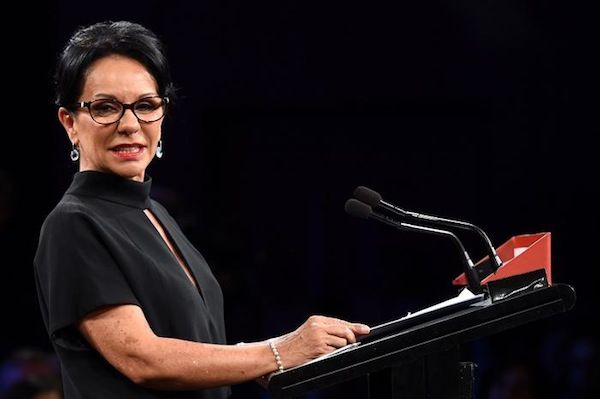 Linda Burney is the first Indigenous woman elected to the House of Representatives.

Most of the fresh female faces we’ll see in the new Federal Parliament will be in the Labor party, given the Australian Labor Party managed to pick up a number of key battleground seats over the weekend.

One trend we’ve noticed among this fresh group is that there are a number of mothers who’ve owned and operated small businesses, and claim to readily understand the challenges facing “working families”.

But the fresh blood will not all be ALP red.

After 18 years out of parliament, Pauline Hanson is making a dramatic return, having picked up one Senate spot for herself and potentially a second for her One Nation party. So expect to see a lot of Hanson over the next few years – as well as her anti-climate change, anti-immigration, anti-Muslim and pro-surveillance (on Mosques and Muslim schools at least) agenda.

Meanwhile, it’ll be some days before we have an exact figure on just how many women we’ll see in the new parliament, with a number of women still contesting seats that, as of publishing, were too close to call.

While we don’t expect a dramatic increase from the 30% female representation, we’re at least hoping for an improvement on the just 72 women out of 226 members who made up the last Federal Parliament.

One thing we can celebrate in this new parliament is the election of Linda Burney in the seat of Barton, who becomes our first female indigenous MP in the House of Representatives.

Below are seven new faces to watch – as well as an additional three who may very well claim victory in their seats later in the week.

Linda Burney already has plenty of experience in politics, having served as deputy leader of the New South Wales Labor party. Winning the Sydney seat of Barton over the weekend, she’s now the first Indigenous woman elected to the House of Representatives. She unseated Liberal Nickolas Varvaris in the process, and used her victory speech to recognise the many cultural groups that make up her electorate. A former teacher, Burney has served on a number of boards including the NSW Board of Studies, SBS and NSW Anti-Discrimination Board. When she was first elected to NSW Parliament (also as the first Indigenous woman) she said in her maiden speech that it was “difficult and alienating” to look in the mirror while growing up as an Aboriginal child. The mother of two held a number of influential positions in the NSW Labor party and became interim leader in 2014 when John Robertson resigned.

Labor candidate Emma Husar has claimed victory in the Western Sydney seat of Lindsay, removing Liberal Fiona Scott in the process. As a mother of three raising her kids in the area, she says she readily understand the challenges affecting “working families”. She’s previously served on local school P&C committees, led community fundraisers, and has been awarded the Penrith City Council Carer of the Year award. She campaigned on three key issues, Gonski, Medicare and the local Nepean Hospital.

Susan Lamb’s been named the “rookie” who claimed the Liberal Party’s “biggest scalp”, having taken the Brisbane seat of Longman from the high-profile up-and-comer, and our youngest ever MP, Wyatt Roy. A mother of four, Lamb’s lived and raised a family in the area, is a former primary school teacher, and works as an early childhood education campaigner with the United Voice union.

A former radio journalist, Susan Templeman has taken the Blue Mountains seat of Macquarie from Liberal Louise Markus. Templeman told the ABC her campaign on local issues, like the proposed western Sydney airport, ultimately resonated with voters. She’s lived in the Blue Mountains for more than 25 years, running her own media training company from the region with clients Australia-wide.

Rebekha Sharkie had one of the most high-profile wins of the election, taking the South Australian seat of Mayo from Liberal Jamie Briggs. A former Liberal and staffer for Briggs, Sharkie became disillusioned with the Liberal party after seeing senior members, including then opposition leader Tony Abbott, campaigning in front of the infamous ‘ditch the witch’ sign. Representing the Nick Xenophon Team, she’s the first non-Liberal and first woman to hold the seat. The mother of three who works in the youth sector and runs a small business with her husband says she wants to address youth unemployment in her electorate.

The Labor candidate narrowly took the Tasmanian seat of Braddon from Liberal MP Brett Whiteley, declaring a strong focus on people in her electorate gave her the winning edge. The former Devonport City councillor and mother of three young boys told The Mercury she’s grateful the campaign finished as the school holidays are starting.

Not a new face, but a returnee after 18 years out of Parliament. Hanson’s set to be the most high-profile (and controversial) woman in Parliament, having won at least one Senate spot with her One Nation party. Her party wants a Royal Commission into the ‘corruption’ of climate change, the Renewable Energy Target scraped, and a ban on the intake of Muslim and other migrant refugees. Meanwhile, her party also wants to see burqas and niqabs banned in public areas and mandated surveillance of mosques and Muslim schools.

The ALP candidate looks set to take the Townsville seat of Herbert from Ewen Jones. The mother of three has owned and operated a range of small businesses with her husband, covering everything from retail to hairdressing and vocational training. Currently the chief executive for a not-for-profit in the mental health space, she places a strong emphasis on diversity and puts job security, workers’ rights and quality education and healthcare high on her agenda.

Professor Anne Aly’s a counter-terrorism expert and Labor candidate who’s still in the running for the Western Australian seat of Cowan. If elected, the academic at Curtin University and mother of two would become the first Muslim woman elected to Parliament. Aly received a large swing from the Liberal MP Luke Simpkins, and told reporters that an attack on her government-funded anti-terrorism work may have backfired for the Liberal party.

Leisa Neaton is still in the running to take the Queensland seat of Capricornia from the Liberal-National Party’s Michelle Landry. She’s a former principal of the largest primary school in Central Queensland.