Time to go Joe: Hockey to leave politics as Scott Morrison takes over as treasurer 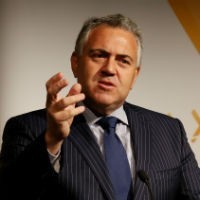 Joe Hockey will resign from the House of Representatives, after a cabinet reshuffle earlier today that saw Scott Morrison appointed as Treasurer.

Announcing the new make-up of his cabinet this afternoon, Prime Minister Malcolm Turnbull said Hockey informed him he would not be seeking another portfolio in cabinet and intends to resign from parliament “in due course”.

“Joe has made a long and distinguished contribution to our nation’s government and parliament over many, many years, for which I thank him,” the Prime Minister said.

“I believe he has a further contribution to make in our nation’s service.

Hockey later released his own statement, confirming his intention to leave politics.

“After having served for nearly 20 years as the Member for North Sydney and seventeen years on the frontbench, I advised the Prime Minister that I did not wish to continue as a minister in the government and that it is my intention to resign from the House of Representatives,” Hockey said.

Hockey said he is honoured to have served his local electorate as well as serving on the frontbench.

“In each and every ministry from Financial Services to Employment and Workplace Relations, from Small Business and Tourism to Treasurer, I have sought to do my very best for the people of Australia,” he said.

Hockey was widely tipped to lose the Treasury portfolio after Turnbull ousted Tony Abbott as leader of the federal Liberal Party last week.

In a survey of SmartCompany readers, 70% of survey respondents called for Turnbull to remove Hockey from the role, with 53% of those who completed the survey nominating Morrison as their preferred choice.

The removal of Hockey is part of a wider cabinet reshuffle that Turnbull said will form a “21st century Government and a ministry for the future”.

The reshuffle saw small business minister Bruce Billson replaced by Kelly O’Dwyer, who also takes on the role of assistant treasurer from Josh Frydenberg, who will now be Minister for Resources, Energy and Northern Australia.

Eric Abetz has been stripped of the employment portfolio, which goes to Michaelia Cash, who will also take on the role of Minister for Women and Minister assisting the Prime Minister for the Public Service.