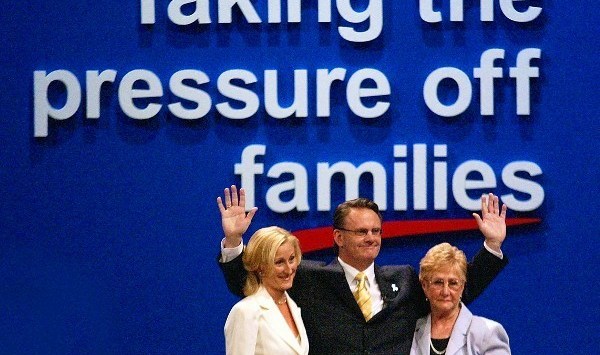 Above: “We also want to grow the Australian economy through more assistance for small business backing their hard work and enterprise,” said Mark Latham in his 2004 budget reply speech.

The Australian small business community has reacted with shock and disbelief to an article from the former leader of the federal Labor Party that called small business owners the “garden gnomes of the modern economy” and “blank-faced losers serving up kebabs and pizza slices in greasy food halls and shopping malls”.

The Council of Small Business of Australia, along with small business payment service DragonBill, has slammed the “obviously wrong and bizarre” opinion piece by former politician Mark Latham, which was published in the Australian Financial Review on May 30.

“In no other section of society do we praise smallness, let alone construct religious-like shrines where we’re expected to worship the glory of teeny-weeny-sized enterprises” the former opposition leader wrote.

“Self-evidently, if the businesses were any good they wouldn’t be small. They would be big monstrous things with massive levels of profit, employment and economic grunt.”

“Isn’t this what the free market is supposed to produce: financial behemoths that can compete internationally and return whopping great dividends to their shareholders?”

“Not a pack of blank-faced losers serving up kebabs and pizza slices in greasy food halls and shopping malls.”

Instead, Latham opined that “true aspiration” is “big products for a big country”. “As a society, on every front, big is beautiful,” he said.

“Australia is famous for its Big Things, not its statuettes,” Latham said, referring to tourist landmarks including the Big Banana in Coffs Harbour, New South Wales, and the Big Prawn in nearby Ballina.

“There’s not a tiny thing among them. Small businesses, in effect, are the garden gnomes of the modern economy—purely ornamental and totally dispensable.”

Latham came to the conclusion that the reason why politicians “fall over themselves in sucking up to small business” is simply for votes.

“John Howard invested the cult of small business in the late 1990s and it has now gathered momentum to the point where Labor and Liberal are bidding against each other for lower small business tax rates,” he said.

“As section of society become numerically larger, political parties see them, not as opportunities for rational economy policy, but as opportunities for electoral success. Once these groups establish a beachhead in the federal budget, their subsidies and concessions tend to grow in direct proportion to their voting rights.”

Latham’s attack comes at the same time as the federal government is rolling out a series of ads telling small business owners how the budget’s $5.5 billion small business package will affect them.

But members of the small business community are outraged at the comments, with COSBOA executive director Peter Strong telling SmartCompany this morning he felt he had no choice but to respond with his own article.

Strong labelled Latham’s article as “odd comments from a failed politician” and said the piece is “written in Latham’s normal style, which in this case is bile infested comments and insults directed at small business people”.

“His column attacks the integrity, the intelligence and the capacity of over 2 million Australian men and women who between them employ over 4.5 million other people,” Strong wrote.

“In the modern world, we need things big and small and also medium,” Strong said.

“We need a broad and interesting society where competition between businesses is fair and where the consumer can choose between local kebab shops or a chain.”

Strong’s comments have been backed up by DragonBill chief executive Luke Hally, who rebuffed several of Latham’s points in a blog post called “Small is inspiring”.

“Running a small business isn’t for everyone and while some people do it out of necessity, most do it out of the desire to do things better and make it on their own,” Hally said.

“No matter the reason or the business, going out on your own involves risk and guts—we think that every small business owner is inspiring and deserves respect.”

SmartCompany was unable to contact Mark Latham this morning.