Labor leader Anthony Albanese will make a “vision statement” on Tuesday, where he will emphasise manufacturing job opportunities flowing from the renewables expansion. Source: AAP/Paul Miller.

Anthony Albanese will seek to marry a strong commitment to a low-carbon economy that can fuel a “manufacturing boom”, with firm support for coal, in his first “vision statement”, to be delivered in Perth.

“Simply put, the road to a low-carbon future can be paved with hundreds of thousands of clean energy jobs, as well as supporting traditional jobs,” the opposition leader says in his ‘Jobs and the future of work’ address.

Albanese also continues repositioning Labor with pro-business and pro-growth rhetoric; his sentiments on business contrast with Bill Shorten’s criticisms of the “top end of town”.

“Like Bob Hawke and Paul Keating, I understand that building the future means we must first and foremost be in the business of creating wealth, as well as ensuring it is distributed fairly,” he says.

“Labor is proudly and resolutely pro-growth. We understand that successful businesses and a vibrant economy are essential prerequisites for job growth.” An extract of the speech was provided ahead of its Tuesday delivery.

Labor wants to lead the “clean energy revolution”, Albanese says. But while he talks up the job creation capacity of expanding renewables, it won’t be until much closer to the election that the ALP crafts its revised policy on emissions reduction targets, about which there is sharp internal dispute.

In the wake of the opposition losing votes, especially in Queensland, over its equivocation on coal mining, Albanese is sending a reassuring message to workers in that industry.

Moreover, he links coal to clean energy, pointing to the use of coking coal in the production of wind turbines.

“Our traditional industries are also poised to benefit from a low-carbon future. Australia could be exporting 15.5 million tonnes of coking coal to build these turbines. This is the equivalent of three years output from the Moranbah North coking coal mine in Queensland,” he says. 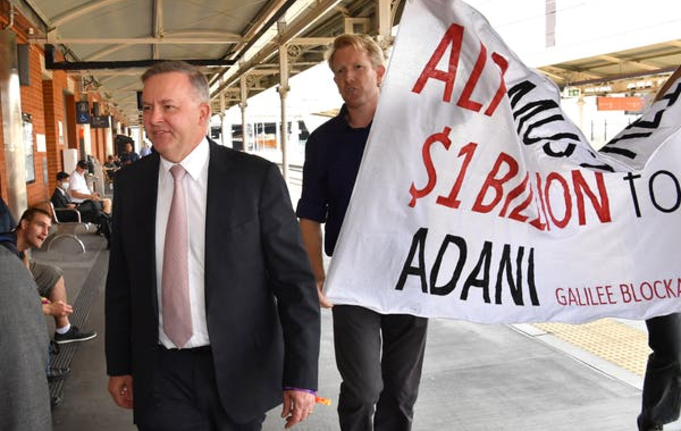 Anthony Albanese in 2017 when he was Labor’s transport and infrastructure spokesman, at a Brisbane train station, followed by protesters opposed to the Adani coal mine. Source: Darren England/AAP.

Albanese says in a decarbonising world “with the right planning and vision, Australia can not only continue to be an energy-exporting superpower, we can also enjoy a new manufacturing boom. This means jobs.”

While a low-carbon future would give the opportunity to revitalise manufacturing and create jobs, the government’s “current policy settings barely acknowledge climate change, let alone seek to exploit the opportunities that, over time, can come with the global shift to renewables.

“In the century that’s before us, the nations that will transform into manufacturing powerhouses are those that can harness the cheapest renewable energy resources.”

Pointing to Australia’s abundant sources for renewable energy and its engineering and scientific expertise, Albanese says: “Australia can be the land of cheap and endless energy — energy that could power generations of metal manufacturing and other energy-intensive manufacturing industries.

“Our resources and capability also offer us the scope to be the capital of mining and processing of the key ingredients of the renewables revolution.”

In the low carbon world, Albanese points to the particular role for lithium, which is not just mined in Western Australia but is being developed into an upstream industry. “As electric vehicles, energy storage systems and smart devices become more mainstream, the global demand for lithium batteries will explode,” he says.

“The emerging lithium industry is a living example of how real-world economic progress happens — business, unions, researchers and government coming together to deliver on an aspiration bigger than just digging stuff out of the ground and letting the value-adding happen offshore.

“Not only is Australia in a position to build the batteries, Brisbane-based company, Tritium, has developed and is already exporting the technology to recharge them. Their charging stations are the fastest in the world, and are fuelling the shift to electric vehicles in Europe.”

On macroeconomic policy, Albanese once again urges the government to inject some stimulus into the economy.

“Today I call upon the government to introduce an upgraded investment guarantee as part of a measured economic stimulus package to boost our sluggish economy.

“A bring forward of infrastructure investment combined with increased business investment would create jobs in the short term as well as lift productivity.”

NOW READ: Explained: What the government is (and isn’t) doing to slash energy bills