New Zealand outstrips Australia, UK and US with $12 billion coronavirus package for business and people in isolation 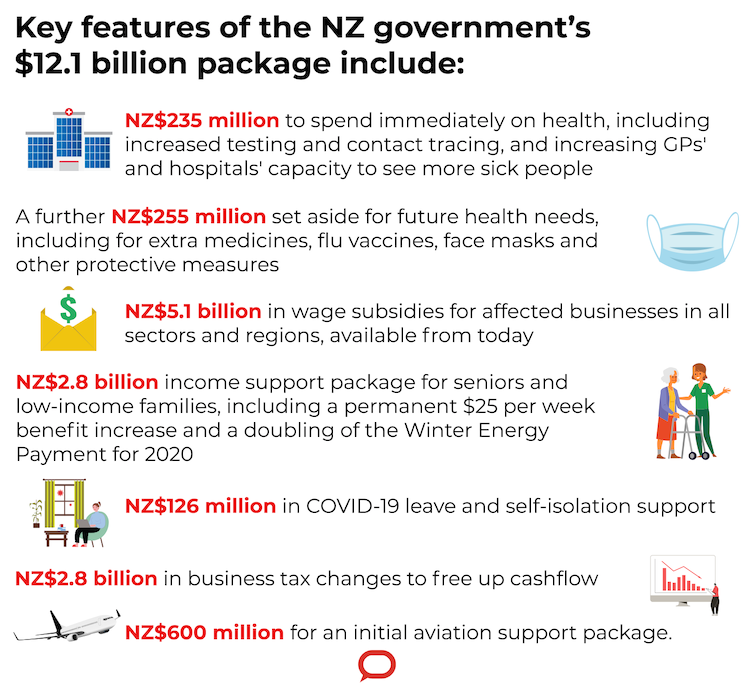 Source: The Conversation with Shutterstock images.

Announcing the package on Tuesday, Finance Minister Grant Robertson said: “A recession in New Zealand is now almost certain, with the advice that we are receiving that the shock will be larger than that seen during the Global Financial Crisis.

“This will affect every part of our economy, now and for some time to come. We are going to see many New Zealanders lose their jobs, and some businesses fail, we will have an extended period of deficits and our debt as a country will have to substantially increase.”

Robertson stressed “this is not a one-off package”, saying the government would spend more if needed, even though today’s measures alone represent “more than the total of all three Budgets’ new operating spending in this term of government put together”. Further spending is expected in May’s budget.

“Today’s announcement is the first tranche of our response,” said Prime Minister Jacinda Ardern. “We’ve gone hard with our health response, and now we’re going hard with our financial assistance.”

On Monday, The NZ Herald up to 10,000 retail workers could lose their jobs over the next few months due to the fallout from COVID-19.

Below, three economists from New Zealand and Australia give their take on New Zealand’s economic response to coronavirus.

This is certainly a welcome announcement to help New Zealand deal with what may well be a substantial recession.

On the economic side, there are several specific steps, all of them positive. The COVID-19 leave and self-isolation support gives affected workers some basic income support.

The wage subsidy scheme supports employment of most-affected firms with a subsidy of NZ$585 per week per full-time worker for up to 12 weeks. This should help in reducing job losses (but limits the total support to a maximum of about 21 full-time employees, or NZ$150,000 in total, with separate negotiations for larger companies).

It is sensible to limit the government’s exposure and more generally shares costs of a temporary downturn with employers. I imagine the 12-week window will be reviewed and adjusted as necessary. There is also various targeted business tax support in the form of deductions, delays, etc.

All of this is good in that it provides incentives to not shed too many jobs in an economic downturn. There is a risk that policies are too specific, though.

The government could have been less prescriptive with its subsidies, and have instead followed the German approach of providing unlimited finance to companies to bridge them through the tough times. In the world of zero interest rates, this is a relatively cheap lifeline to offer — but with some additional risks.

While I’m not an expert on health care, today’s announcement was relatively light on details about the NZ$500 million for new health spending. Cheques can be issued to people and businesses fairly quickly, but scaling up of the health care response is more difficult. Health facilities take time to build, testing facilities need to be imported, ventilators need to be shipped from overseas, plans take time to execute, and staff take time to recruit and train.

So beyond this valuable effort to help the economy, I’d like to hear a lot more from the government on how it will really deliver on protecting the health care of New Zealanders in a major global health pandemic.

An Australian economist on what Australia could learn from NZ

Its package is worth 4% of gross domestic product. Australia’s is less than 1% of GDP.

And it dwarfs it in the help it extends to the businesses and workers who are going to suddenly lose income.

All businesses in all sectors, which can show their revenue has slumped 30%, will be paid NZ$585 per week for full-time staff, and NZ$350 for part-time staff, up to a total of NZ$150,000 per business.

For as long as it lasts, it will enable them to keep their staff employed. It’ll cost NZ$5.1 billion. Taking into account Australia’s bigger economy and the near one-to-one exchange rate, a similar programme in Australia would cost more than $40 billion. To date, Australia has pledged just $17.6 billion for the economic package and $2.4 billion for the health package.

New Zealand will also provide direct financial support for people who are sick or in self-isolation or caring for dependents who are sick or in self-isolation for up to eight weeks, also at the rates of NZ$585 per week for full-time workers, and NZ$350 for part-time workers, and it’ll lift the New Zealand equivalent of Australia’s Newstart unemployment benefit.

All of these are measures that would fit well in the second economic package Australia’s prime minister plans to announce before Australia’s parliament resumes for a slimmed-down session next week.

By raising the financial stakes and by directing help towards businesses and workers who would otherwise struggle, Jacinda Ardern has shown Australian Prime Minister Scott Morrison what’s possible.

Well-targeted to keep workers in jobs

Overall, this is an impressive package. It’s substantial, meets the most urgent needs, and is mostly well targeted.

Perhaps the most significant change is that all main government benefits will increase by NZ$25 per week, starting straight away from April 1. This change is permanent. Although we know from the recent report by the Welfare Experts Advisory Group that this in itself is not going to be enough to lift many beneficiaries out of poverty, it is a significant increase and will make a lasting difference to a lot of people.

The extra money they receive will also flow directly back into the economy helping to stimulate demand.

The wage subsidy scheme will also be significant in reducing the number of workers laid off because of the downturn. The NZ$585 per week for full-time staff, and NZ$350 for part-timers, is likely to be large enough to mean that many affected employers will be able to keep workers employed at least over the next three months.

NOW READ: The government is writing cheques to small business owners: This is how much you’ll get