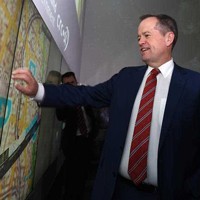 Opposition Leader Bill Shorten has announced a “second wave” of policies that Labor will be taking to the election with the aim of making Australia a “startup nation”.

The $17.8 million policy package includes efforts to encourage young Australians to enter the startup world, visas to entice international entrepreneurs to set up shop here, and ways to bring innovation to government decision-making.

Shorten told StartupSmart it’s all about making sure Australia is competitive in the global race to “capture the jobs of the future”.

“Over the next two decades if we get our startup policies right, there’s another half a million jobs,” Shorten says.

“We’re in a race with the rest of the world for jobs and growth, for quality growth and fairness.

“Startups manifest a lot of these things; they’re indices of success if the policies are in the right direction.”

Startups have recently been placed at the forefront of Australian politics with new Prime Minister Malcolm Turnbull placing a strong emphasis on innovation and new technologies in both his first acceptance speech and subsequent cabinet reshuffle.

The competition to win over the Australian startup community has begun, with Shorten saying the public should looks towards the government’s history with things like the NBN, rather than the startup rhetoric.

“The Liberal party can talk about things, but you’ve got to look at their record,” Shorten says.

Shorten announced the raft of new policies at a press conference at Tank Stream Labs in Sydney today.

The first wave of Labor policies regarding innovation came in Shorten’s 2015 budget reply, where he focused mostly on STEM education. The policies included emphasis on coding in schools, scholarships for STEM teachers, as well as a $500 million Smart Investment Fund.

Shorten says the new host of reforms that Labor will be bringing to next year’s election are all about giving power to entrepreneurial individuals.

“I’m a big believer in empowerment,” he says.

“Empowered individuals in control of their lives create quality growth and fair communities are the best seed-bed for innovation.”

The flagship reform of the “second wave” is the introduction of income-contingent loans for final year university students or recent graduates looking to establish a startup in an accelerator or incubator.

The ‘Startup Year’ involves a HECS-style loan of up to $10,000 for 2000 students or graduates each year, with the aim of encouraging more educated young Australians to move directly into the tech sector.

To be eligible for the Startup Year, young entrepreneurs would have to be participating in an “accredited program” such as a university or external accelerator.

Recipients would start paying back the loan in instalments once they are earning $54,000 annually.

“If you look at the ages of successful startup businesses, it’s when people are testing ideas, they’ve been learning and have a lot of imagination that the system hasn’t beaten out of them yet,” Shorten says.

Sebastien Eckersley-Maslin, the CEO of accelerator BlueChilli, says he thinks this is a “good initiative”, but only if the right controls are put in place.

“I’m not normally one to advocate for tight controls in this area, but this needs to have strict controls around it,” Eckersley-Maslin says. “It could potentially be exploited.”

“The idea of having the funds deployed through registered training or accredited providers is the right way to go about it, or else you’ll just be handing out $10,000 so people can extend their Schoolies.”

The risks associated with this scheme are low, Shorten says, with a lot of requirements to be put in place.

“That’s where the 43 universities come into being,” he says. “It’s very low risk, with a high reward.

“I support it, with a few tweaks.”

The $10,000 loan might also be not enough to convince graduates to forgo a stable job in favour of operating a startup, Eckersley-Maslin says.

“Entrepreneurs will do it anyway, and $10,000 is unfortunately not enough to make an impact on someone moving across, but it will support people who are doing it,” he says.

“It’ll create more bodies and groups that’ll be able to support entrepreneurs and give them somewhere to deploy money. Just like HECS helps higher education bodies, this will help startup-based accelerators and incubators.”

The Startup Entrepreneurial Visa is aimed at 2000 entrepreneurs from around the world looking to set up shop in Australia. Labor says it’ll be targeted at individuals with access to around $200,000 which can then be invested in a startup venture in Australia.

The Global Startup Entrepreneurial Visa will go to 2000 international exchange graduates, allowing them to stay in Australia for one year to establish a business.

“We’re going to open the doors to 2000 of the brightest people in the world to have the chance to have a visa in Australia and back in their ideas,” Shorten says.

“Quite often what happens is when they finish their degree they head back to their home country. We want to encourage some of them to stay in Australia and back in their idea.”

Also included in the package is the creation of an online portal for government agencies to upload challenges for the public to solve.

Along the same lines as Challenge.gov in the US, Shortens says the AusGoV Challenge Platform is a 21st century version of something that has taken place since the 18th century.

Labor is committing spending $5 million to establish a trial of the platform, which will run competitions between ten to 12 agencies seeking to identify “new approaches to utilising data, technology and analytics to solve their policy and management challenges”.

The opposition has also vowed to support pre-commercial collaboration with startups and SMEs by giving them a “food in the door” with procurement tenders.

This funding will be at two levels, with the first phase providing a $100,000 grant for research and development and the second giving up to $1 million for proof-of-concept. Overall this reform will cost $5 million.

The last part of the package is the establishment of the Innovation Investment Partnership, which aims to bring together VC, superannuation funds and startup stakeholders in one place.

With Malcolm Turnbull leading the government’s new focus on startups and innovation, Labor are striving to differentiate themselves and prove their credentials in this area as it shapes up to be a major battleground at the 2016 federal election.

Labor has identified one area where they believe they can land some blows, the NBN.

“Malcolm Turnbull has been talking about a digital future but for two years he has been responsible for rolling out the backbone of that digital future – the National Broadband Network,” the Labor policy paper says.

Shorten adds that there will be more policy announcements in this area to come.

“By all means let’s have a debate about the best path to the future.”

“The Turnbull government wants to encourage ideas for greater innovation and entrepreneurship, but they need to be good ideas,” Pyne says.

“Innovation has to be more than a political buzzword; it’s the only option for our economy if we are to maintain our current standard of living.

“While Labor appears to have a sudden newfound desire to promote innovation in Australia, a better start would be for them to support the China Free Trade Agreement.”

Startup-advocate and Labor MP Ed Husic says he’s willing to work with the other side on these policies if they are, saying “innovation doesn’t wait for elections”.

For the Australian startup community, the positive thing seems to be that both the government and the opposition are throwing their full support behind innovation and new technologies, even if hopes for bipartisanship may not eventuate.

“Startups will benefit from this increased attention, but the economy as a whole will be the real winner.”

“It’s awesome we have bipartisan support on startups and innovation,” he says.

“The future is bright for entrepreneurs in this country, and it needs to be.”

Want to grow your business with Instagram? StartupSmart School can help. This article was first published on StartupSmart.