The federal government’s controversial bid to axe a low-cost patent regime intended for SMEs passed through the Senate yesterday, paving the way for the scheme to be scrapped over the next 18 months.

A second bill which will enable the Australian Taxation Office (ATO) to share some business tax debts with credit-reporting bureaus also passed the Senate, albeit with several amendments, despite opposition from the Coalition.

The developments came in spite of criticism from advocates, such as the small business ombudsman, over the accessibility of Australia’s patent system and how the latest expansion of ATO powers could threaten the privacy of business owners.

In a morning dominated by arguments about small business policy, Senators debated whether SMEs should have their own patent system and whether the appropriate checks and balances were in place to ensure well-intentioned business owners don’t cop the rough end of credit-bureau reporting.

Both pieces of legislation eventually passed, amended in each case, with both Labor and the Coalition uniting to defeat an effort by Centre Alliance Senator Rex Patrick to effectively scupper the patent reforms.

Amid concern about the effects axing the innovation patent regime will have on SMEs, a compromise was reached, including a six-month extension to its lifetime and the agreement a review will be undertaken into the accessibility of patents for SMEs.

Additional protections have also been added to the legislation which will enable the tax office to share some business tax debts with credit-reporting bureaus.

Both Bills will now proceed to the Lower House with bi-partisan support.

Patent system heads to the tip

The government will order a review into the accessibility of patents for SMEs within three months of the legislation axing the innovation patent regime passing Parliament, following amendments passed in the Senate yesterday.

The sunset period for the regime, which was implemented in 2001 as a lower-cost patent system that would be more accessible for SMEs, has also been extended from 12 to 18 months. 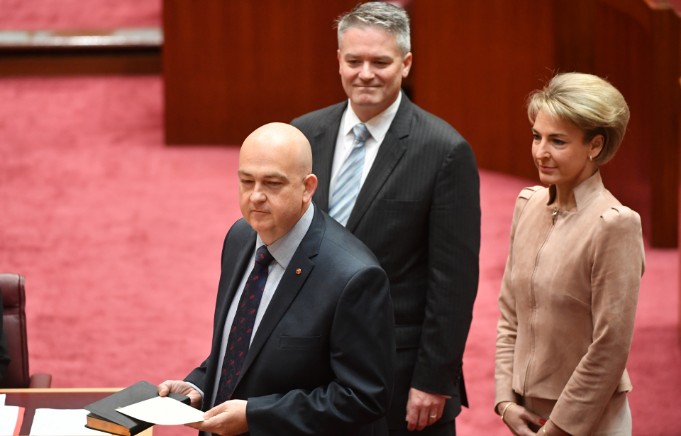 Productivity Commission (PC) figures from 2016 found there were 6,500 active innovation patents in Australia, compared to 130,000 standard ones.

And why is it being scrapped? Innovations patents have been criticised by the PC, and the Coalition, which have both argued the system has actually done more to harm SMEs than help them.

About 100 innovation patents are filed by SMEs each year, Intellectual Property Australia has said. In contrast, SMEs file between 1,000 and 1,400 standard patents each year.

Critics have made two primary points. First, the scheme is underutilised by SMEs, and second, the lower barrier to innovation has caused the creation of many low-value patents, which, the PC argued, create uncertainty for other innovators.

Further, the PC has argued the system has spawned an industry of its own, with patent attorneys cashing in by “gaming the system”, including taking out patents so they can improve their bargaining position in disputes and limit the entry of other competitors.

Patrick: “It makes no sense”

The Australian Small and Family Business Ombudsman (ASBFEO) and several dozen other groups which engaged in consultation over the bill have, however, argued against axing the scheme.

Senator Patrick, who made an 11th-hour attempt to effectively scrap the entire reform, described Brockman’s argument as “unconvincing”.

“You are shutting down a scheme that is useful to Australian companies and it’s not going to save you a brass razoo,” he said.

“It makes no sense to shut down the IPS [Innovation Patent Scheme] when it is useful and valued by SMEs, especially if retaining the system costs you nothing.”

Small business ombudsman Kate Carnell has argued that while the existing innovation patent scheme has clearly identified issues, scrapping the entire thing without a replacement regime would open the doors to intellectual property theft against SMEs.

“Our position has been that it might not be working all that well, but not having anything is a really bad outcome.”

In the wake of consultation about the prospective effect of axing the innovation patent regime, the Senate yesterday came to a compromise, voting to move ahead with axing the system, but with a longer grandfathering period and a review of the implications for SMEs.

There’s not much detail on what this review will look like as yet, but it is expected Intellectual Property Australia will undertake consultations with SMEs on the best way forward.

The Coalition and Labor have said they support efforts to identify a new way to help SMEs with patent accessibility.

Several additional protections have been added to reforms which will expand the ATO’s tax debt enforcement toolkit.

Under legislation passed by the Senate yesterday, the ATO will be able to disclose business tax debts to credit-reporting bureaus, which could in turn negatively affect the credit scores of related directors.

Only companies which have racked up debt in excess of $100,000 that’s overdue for at least 90 days would be subject to the changes, designed to help the tax office close the $10 billion small business tax gap.

The ATO would not be allowed to pass on information about disputed tax debts, or if a payment plan is being undertaken on outstanding debt.

There were a range of concerns raised about the implementation of this legislation during consultation, particularly relating to Inspector-General of Taxation (IGT) oversight, taxpayer transparency and the privacy of small business owners.

Critics argued protections need to be introduced to ensure businesses that do have their information shared can have that data expunged if they do engage with the tax office.

The tax watchdog itself also raised a series of concerns of its own, saying resourcing constraints could inhibit its ability to appropriately oversee the operation of the legislation.

Proponents, including CreditorWatch chief executive Patrick Coghlan, have supported the bill, saying it would improve the veracity of credit data, helping to crack down on illegal phoenix activity.

“All the bureaus have extremely transparent and auditable systems,” he tells SmartCompany.

Other concerns regarding the privacy of small business owners and the capacity of the IGT to carry out its role under current resourcing constraints are subject to ongoing discussions between the ATO and the IGT.

A committee which canvassed concerns with the bill in September recommended the government work with the IGT and the ATO to address the watchdog’s concerns.

But Senator Patrick yesterday accused the government of failing to heed that advice.

“We’re not talking about some lobby group that has concerns; we’re talking about the Inspector-General of Taxation, the watchdog that sits over the Taxation Office, that has to deal with the problems that are created by some of the decisions of the tax office,” Patrick said.

“We need to put protections in place that make sure people are not put in positions of great disadvantage.”

Coalition Senators said the ATO and IGT are already working through issues raised during consultation.

Senator Patrick also attempted to increase the notice period — the amount of time between the ATO notifying a small business taxpayer about prospective information sharing and when it occurs — from 21 days to 42, after small business advocates argued the period was too short.

This failed, but both Labor and the Coalition decided to support increasing the period to 28 days instead.

I really do not understand why this is a big deal, given that only 100 innovation patents are lodged per year. These patents only become valid when they have been examined to determine that they do not infringe existing patent or publish art, i.e. published information on the technology. From my perspective, they are of little value until they have been examined.

My approach (having lodged 8 patents) is to lodge a provisional patent, which defines the prior date and provides you with 12 months in which to lodge a full patent. This gives the inventor time to research the technology to ensure it is unique, does not infringe existing patents and there is a business case for the technology. If it is unique the inventor can then lodge a PCT (International) or Australian standard patent.

Writing a patent is not that hard and you can lodge the provisional for less than $100.00, so why the big deal? Why not talk about tax breaks or incentives for inventors, I believe that the senator’s time would be much better spent this way.

Is it not time inventors had a say?