Tony Abbott’s first year: The economy is open for business, but closed to real reform 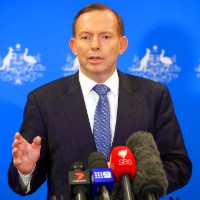 In his victory speech on election night last September, prime minister Tony Abbott declared Australia was “under new management and … once more open for business”.

There were, of course, specific promises such as repealing the carbon and mining taxes, balancing the budget, and building lots of new roads. But the “open for business” line foreshadowed a broad increase in confidence in the economy.

In terms of confidence since then there has been little good news about the economy – and some bad, especially regarding unemployment. The Westpac-Melbourne Institute consumer sentiment index is 10.8% below its post-election peak.

Treasurer Joe Hockey has told us there is an imminent debt crisis, but can’t persuade parliament to pass his budget. The trade minister, Andrew Robb, has said budget blocking puts Australia’s credit rating in jeopardy. The confidence of those receiving family tax and other benefits has been shattered, as has the confidence of those of us who are happy to see our tax dollars spent to make real the promise of opportunity for those less fortunate – a promise that has always been at the core of Australia’s social compact.

I get it: the first step to recovery is recognising that you have a problem. But so far the government seems to have scared global financial markets a fair bit, but not scared the Australian public and their representatives enough to do anything about it. And that’s largely because we don’t have an imminent debt crisis. We have a long-term structural budget problem caused by an ageing population — a problem shared by most OECD countries.

Yet, despite the dramatic rhetoric, nothing has been done to address the structural problems. To say the least, this is not great “expectation management”.

A major election promise was to repeal the carbon tax – legislation that was passed last month. It remains to be seen whether the so-called “direct action” policy on climate change will be implemented, but this is one area where business is certainly happy.

And why not? Under a carbon tax or Emissions Trading Scheme businesses pay if they pollute. Under direct action they get bribed not to pollute. It is, however, clearly bad policy for the economy as a whole — a fact that everyone except for hardcore climate change deniers acknowledge.