Q&A panellist says unemployed should start their own business, but SMEs still face barriers in hiring and raising capital 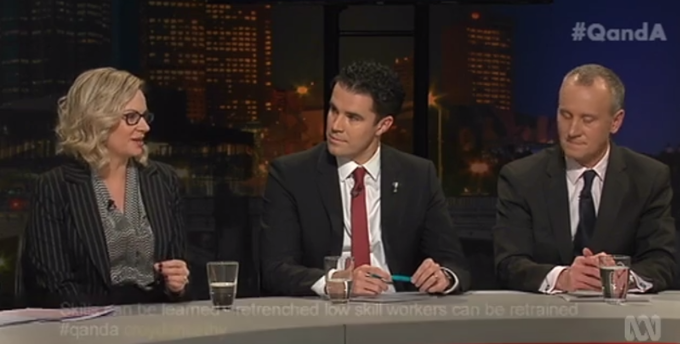 Industry leaders say a small business industrial award would make it easier for small businesses to hire more staff, following a suggestion made last night on the ABC’s Q&A program that struggling workers should just “start their own businesses”.

Industrial relations expert and News Corp columnist Grace Collier appeared on the panel last night and answered questions from the audience about the future for workers with basic skills in Australia, reports the ABC.

The discussion in part centered on the manufacturing industry, and specifically if the government should subsidise certain industries in order to provide jobs and keep the industries healthy. When asked her opinion by host Tony Jones, Collier prefaced her statement by saying: “I’m going to offend everybody in the room”.

“In reality, there is one person in this world who can guarantee a happy future for you, and that person stares at you in the mirror every morning.”

Collier continued to outline how she herself had previously been sacked from jobs and had “flops and successes” in starting her own businesses.

“Everybody has something that they’re good at. You work out what you’re good at and you try and make a career out of that,” she says.

Greens leader Richard Di Natale fired back at Collier, saying there “are more people than jobs, that’s why we have an unemployment rate”.

“People can start their own businesses,” Collier responded.

“It’s terrible isn’t it? Wouldn’t it be awful to have to start your own business because someone else has to give you a job?” she said.

Collier’s outlook prompted a backlash from her fellow panelists, but Council of Small Business Australia chairman Peter Strong agrees – although he admits more needs to happen to make it easier for Australians to start and grow their own businesses.

“She’s right, that’s where the future will lie. We need to look more at the barriers in growing a business, not starting a business,” Strong says.

“When businesses come to the stage of growing the business and employing staff, that’s the real issue. Some businesses find that so difficult that they just don’t employ anybody.”

Strong believes a small business industrial award would go a long way towards increasing the number of successful SMEs.

“I’ve had so many businesses come to me and express how surprised they were at how hard it was to employ their first employee,” Strong says.

“When it gets to 15 staff or more, some just don’t bother. We need a small business industrial award, it has got to be looked at.”

“The questions surrounding employing your first person are very real. Many businesses like cafes and restaurants have people employed under 3-4 different awards,” Carnell says

“If you want to encourage people to set up their own businesses, we have to make it easier for them to do that.”

Carnell also agrees with Collier’s comments, remarking, “It’s not that ridiculous,” and highlighting the 1 million businesses in Australia who don’t employ anyone but are successful.

The struggle for start up capital

Collier’s comments prompted heckling from the Q&A audience, along with a lot of digital heckling coming from Twitter.

“Grace Collier: “Unemployed? Start a business.” um, half of new businesses fail and you need start up capital. Fail, you go broke,” one Twitter user commented.

Both Strong and Carnell agree with the view that hopeful business owners often encounter difficulties accesses capital, with Strong saying “we need to confront the difficulty young people have getting loans”.

“[The Australian Prudential Regulation Authority] has said smaller businesses are a higher risk when it comes to loans, and I challenge that,” Strong says.

Carnell believes “disruptive lenders” are the future for small businesses, acknowledging they are making it easier for business founders to get loans.

“It’s good to see an increasing number of these disruptive lenders popping up, we need more alternative lenders to the banks,” she says.

However, she believes there is still a “significant gap” in the lending market.

“If we want to make it easier for first-time business owners, we need to address this significant gap in the market.”

Looking for a solution?
Here’s mine….
Banks should be levied 1% of their annual profits to go into a fund.
This fund is used to match business applicants dollar for dollar of course provided there are some checks and balances and the right protocols are put in place.
This gets replaced every year by the banks topping up the fund again.
Some businesses might just win, some might lose. There has to be qualification criteria.
An example .. existing business having cash flow problems – hey these things happen.
Business owner has already got everything on the line and there is just no reasonable money available. Sometimes the difference between this so called bridging finance is the reason for survival or failure. Where do these people turn to?
15 years great credit history, great growth and there could be a legitimate reason with nowhere to go.
Instead everyone – repeat everyone is reduced to he lowest common denominator.
This is a discussion worth having.

“Banks should be levied 1% of their annual profits to go into a fund.”

Why? If this is the case, why shouldn’t any business be levied for the same type of purpose?

Who is going to implement and manage it?

Will other levies be raised for other purposes simply because they can. You know, cause profits are evil and wicked, and its not fair on the people who don’t want to work as they miss out. Poor little darlings.

As one bank put it: “It’s your money Ralph”

Points taken and partially valid.
Why I say banks is because they are the conduit for finance. They are entitled to be risk averse which apparently they are not. The flow on affect of some freed up capital would be enormous. Just think about it $300 million a year in funds available. Contributors could be allowed to write off their percentage of losses and the economy actually gets a leg up. Yes there have to be limits – let’s say businesses with a turnover of up to $3million and a valid reason for a need for capital based on trading history.
Currently there are business closing up that have hit a hump and have nowhere to go to get help …. oh yes forget about cash lenders at 24%.
This could be available at 7% and yes their will be some bandits who think of ways to get easy money, but credentials will have to come into play.
Who will run it? Some agency that are well credentialed and get paid handsomely and will be judged on an annual basis. I don’t have all the answers. We first have to find out if it’s feasible.

I’ve never been given a job, offered a job or head hunted. The job search providers and Centrelink and certainly never found me a job.
I asked myself, “So what are you going to do about it?”
No point blaming everyone and anyone else. I took responsibility for my life and career and “cold called” potential employers, whilst scanning job ads and doing automatic searches via SEEK etc.
This has been the way I’ve secured employment all my life. I remember that 60% of jobs are not advertised and I know that if you make yourself indispensable to employers they will find a way to employ you and keep you. It’s in their best interests.
Alternatively I have started several successful business over the decades and grown them from scratch on virtually no budget. Sure, they were professional service business needed little or no initial capital…and sure I started with second-hand this and that to get going…and it took time to build. But sometimes you have to do it yourself, possibly in partnership with others.
You must do training in business though. If you are on benefits go via the NEIS scheme and in any case, get advice…lots of advice before starting…and do a business plan.
I have several suggestions for new businesses, especially for those ineligible for NEIS:
1) No tax on any profits for new businesses in their first year. Low tax in the second year.
2) Mentoring and advice facilities for new businesses, similar to NEIS. This could be undertaken by older workers/Baby Boomers who are retired or looking for work Win-Win
3) Low or no interest government loans to new small businesses. Not grants, loans! These would be paid off as the business grows.
Just a few thoughts to help the unemployed and to get people thinking for themselves and less dependent on the system. I believe in win-win in every situation!
You can see more on these issues on my website: http://www.mkaff.net

Yep, I was long term unemployed out of Uni. No jobs to be found. After a while, when I realised that the only person who would get me out of the situation was me, then things started to change.

But the current generation bemoan that it’s not their fault and that they’re entitled to a job. No, you have to earn that right. With reliability, determination, hard work and dedication.

The reason there is no jobs is because there is not enough business around for all companies to employ more people. If you start your own business you will have to compete with all the businesses already out there who do not have enough work to keep people employed, but you have no infrastructure and they do. It will be difficult to get ahead, and most people who are employed do so because they do not have the knowledge or do not want to have to deal with all the problems and risks involved in running a business. If you have the ability to run your own business and never run your own business you will probably be among the people that are employed and that looked after well by employers. So while it sounds like a good suggestion you have to be realistic and consider the facts.

I started my first business when still at school — Lawn mowing and gardening. That is not hard nor expensive to start.