Following the Morrison government’s budget promise to accelerate Australia’s digital transformation with a raft of policy aimed at small business, the SME community is navigating the practical terms of how businesses can manage scaling up their technology and workforce.

While Opposition Leader Anthony Albanese’s budget reply was light on detail around business policy, Labor made a more concrete election pitch to the small business community on day one of the COSBOA National Small Business Summit in Sydney on Tuesday.

The first day of COSBOA’s annual summit also saw peak government bodies and industry experts answer the council’s questions and delve into further detail around government policy to aid digitisation of the sector.

In one of her first public appearances, new ACCC chair Gina Cass-Gottlieb highlighted the agency was focused on strengthening consumer guarantees that would benefit small businesses, as well as continue its digital platforms services review.

Among broader measures, enacting recommendations from the review could better protect small businesses from the impact of adverse fake reviews and the closure of social media accounts without appeal, Cass-Gottlieb told the summit. 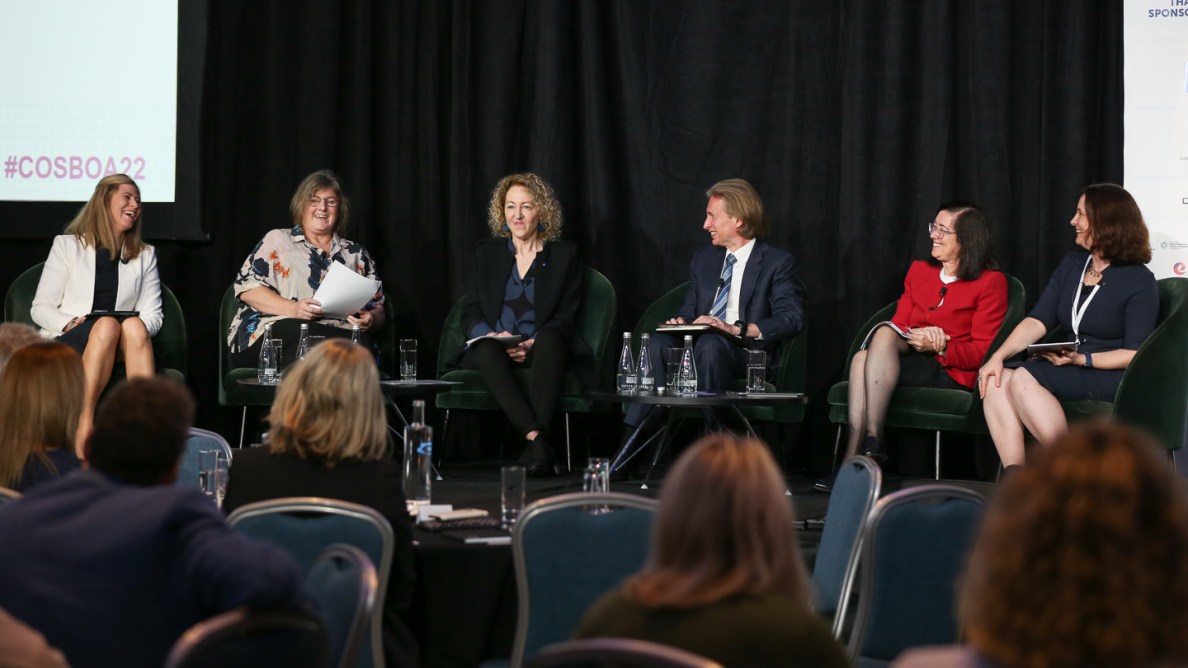 Jeremy Hirschhorn, second commissioner of taxation in charge of the ATO’s client engagement group, said the office is moving full steam ahead in partnership with ASIC on its streamlined business registry system.

ASIC commissioner Danielle Press called out insurance claims handling as a major area of focus for the agency, which wants to ensure “insurers are treating businesses honestly”.

Among challenges for small businesses that the regulators admitted need to be addressed was the ongoing complexity that hampered innovation and growth.

“The bulk of our work should be about communication and education,” Sandra Parker of the Fair Work Ombudsman told the summit, explaining that businesses often inadvertently imposed red tape “on themselves”.

Fair Work will be increasing communication that spotlights the specific industries it has in its sights, such as non-compliance in fast food restaurants, she added.

“It’s not about surprises,” Parker said.

“For the sectors we are not focused on, you don’t need to be concerned.”

“Our solution is: how do we make the system easier and not prone to mistakes,” he said of the office’s current work to improve its user experience to increase compliance.

The ATO as a whole “really understands that it’s: ‘how do I drive employee experience’ to improve compliance”, he said.

The path to business digitisation

In response to the federal budget’s proposed digital skills and technology package for small businesses, stakeholders across accounting, IT and cybersecurity, along with digital innovation experts, said small businesses need education to help reduce fears associated with digitisation.

The package is designed to encourage small business investment, while preparing Australian SMEs to compete in an increasingly digital economy.

Internal research at auDA revealed that 22% of SMEs are so worried about cybersecurity they use the internet less, Sinclair said.

The panel, which sought to inspire ways small businesses can improve their digital presence to “compete effectively and capture the online market” said many businesses need support to manage risk as they invest money and time in digital transformation.

Small businesses aren’t investing in cybersecurity in particular because “they don’t know where to invest and they don’t get much support”, Sinclair said.

The cybersecurity policy proposed by the government in the budget is a welcome first step in changing that, she said.

Independent bodies such as auDA are also developing tools for businesses.

In partnership with ASPI it has launched a free tool, AU check, which enables businesses to benchmark where they sit in terms of cybersecurity against international standards.

David Field, founder of e-invoicing solution software OZEDI, told the summit it has partnered with 40% of the payroll providers to bring Single Touch Payroll (STP) to employees and providers, including a new partnership with Bunnings and its payroll provider Xero.

Following the announcement the government has agreed to feed data to all states into STP systems, small businesses could engage partners such as OZEDI to automate payroll, potentially saving hours of manual work, he added.

But there was still a barrier around mindset for many SMEs.

On the question of whether the government funding is enough of an incentive, Sinclair said while the government’s tax deductions would help propel small businesses to action, “the question is, is the supply chain ready” to scale up products and training services.

Thyer recommends small businesses find a “trusted advisor” to guide them through the process.

“There’s a lot of choice out there. That’s where trusted advisors are so critical. To make sure the right advice comes with the right changes,” she said.

The experts were unanimous in their enthusiasm for small businesses to power Australia’s mission to become a digital leader.

Recent research from CPA Australia showed Australia’s small businesses are lagging behind their counterparts in the Asia Pacific when it comes to embracing digital systems, but the government can play a role in changing this.

“We know that digitisation is absolutely critical to Australian business,” Sinclair said.

The government has pledged to ‘back small business’ by establishing a dedicated unit within the Fair Work Commission and providing millions in funding to the Small Business Ombudsman.

Budget 2022: Company fees to be reduced and removed as part of deregulation agenda

The government says small business owners can expect to pay less in fees when using its modernised business registry platform, under the continuation of its deregulation agenda.