Are you keeping up with the ongoing digital transition? 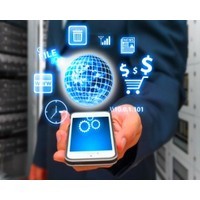 ‘The future is rational only in hindsight’ – Matt and Gail Taylor, founders of MG Taylor.

Science fiction was once for nerds and misfits. Now we’re living it, and the implications aren’t pretty.

Emerging technology is opening doors, finding cures, raising hopes of a better, more connected future. The speed with which people adopt and adapt to new tools is both dizzying and gratifying, human ingenuity at its best.

Predictably, with each new e/i-start-up comes news of devastating job losses elsewhere as another once-iconic brand or sector disintegrates and falls away, like chips off a giant iceberg.

That ‘crack’, that rifle shot of nature, is a physical manifestation of Schumpeter’s theory of creative destruction, where a new economic order arises from the ruins of the old. Just as in the natural world, old bits fall off. New bits emerge. It is part of a cycle played out over generations.

Small comfort for those left clinging to the edges.

“Are we prepared for an economy in which 50% of people aren’t working?” computer scientist Moshe Vardi recently asked.

Noted Nobel Prize-winning economist, Joseph Stiglitz: “What has always been true is that technology has destroyed jobs but has always created jobs … You know the old story we tell about [how] the car destroyed blacksmiths and created the auto industry.”

Unlike past cycles, though, the changes are coming faster and they’re much broader in their devastating impact. What emerges from this latest period of disruption – how societies cope – is anyone’s guess.

“Over the long run, I have confidence we can do it,” Stiglitz added. “But I can see us being in this kind of doldrums for half a decade, for a decade, or for longer.”

Faced with these tectonic shifts, political and business leaders have stepped back and upped calls for innovation, for more collaboration, for bigger productivity gains from those they lead.

The researchers behind GE’s latest Global Innovation Barometer survey picked up the mood of anxiety.

“Business leaders are demonstrating unease with the pace of change and an uncertainty over the best path forward: a trend we’ve dubbed ‘innovation vertigo’,” they note. “Some senior executives even considered innovation to be a threat to their business or country, particularly as technological change and the level of competition accelerate.”

Such insularity does not bode well. Circling the wagons won’t keep change at bay or prepare workers for a far different future.

In an interview with senior executives of GE and others about the ‘new economy’ and the mindsets and skillsets required to thrive in this emergent world, editor Robert Safian says: “These organisations have structures and processes built for an industrial age, where efficiency is paramount but adaptability is terribly difficult. We are finely tuned at taking a successful idea or product and replicating it on a large scale. But inside these legacy institutions, changing direction is rough.”

A growing chorus of observers, researchers and executives, particularly in the innovation arena, claim it’s time to completely rethink the shape of organisations and the nature of work. This is by no means a new argument, but technology has helped shift the conversation to centre stage with a speed that’s made some leaders blink.

Terms like ‘shared value’, ‘sustainability’ and ‘ecosystems’, once the catch-cries of a frustrated fringe, are now part of mainstream corporate-speak. People can connect – for good or not so good motives – like never before.

In fact, companies don’t have to be the bad guys at all; they can be “movements … the sort of movements to change the world”, argues Peter Vander Auwera, a TEDx speaker and a key member of SWIFT’s innovation initiative, Innotribe.

“It’s all about being part of the system you are trying to change,” Vander Auwera says. “But change or incremental innovation is not good enough anymore. The keyword is ‘transformation’: bringing into a new state where there is no option back, a risk to fall back into the old toxic habits.

“It is about a humanisation of our organisations; a transformation at deep people level.”