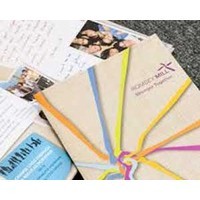 A pig in lipstick is still a pig. Or is it?

A splash of colour can have a staggering effect on how financial professionals gauge your annual report, according to a 2011 study by two American academics.

Academics at the University of Miami and the UCLA Anderson School of Management had a hunch that financial professionals would be just as liable to biased judgements based on aesthetic beauty as the rest of us are when it comes to consumer goods.

To test this, they conducted a three-part experiment using pretty and plain annual reports.

The first part used university students, who were given the first three pages of two identical financial reports, one more attractive than the other. The students priced the stock shares of the spruced-up company 70% higher than the other. The second part used a sample of the general population, with similar results.

But it was the third study that caught the most headlines. The researchers gathered a sample of 55 post-graduate finance students, most of whom were experienced investors, and asked them how likely they would be to invest in the firms whose annual reports they were shown. The experienced analysts fell for the pretty annual report just as often. In fact, the researchers calculated that simply adding an additional colour throughout an annual report had the same impact on the company’s ranking as a 20% improvement in revenue.

David Ansett, the founder of brand strategy and design studio Truly Deeply, says in his experience, most business leaders underestimate the impact of good design on their corporate presentations.

“Because the impact of branding is so difficult to measure, it’s far simplier for businesses to assume its less rather than more successful.

“When it comes to annual reports, it’s highly governed by regulation. Businesses have to produce one, and they want it to look professional, but that’s a long way from using it to present a higher purpose.”

Claudia Townsend, a Professor of Marketing at Maimi University and one of the academics behind the study, said the study should make lives easier for businesses. “Your bosses don’t want to spend extra money on annual reports, but adding that extra colour to the annual report boosts profits. If you invest a little more – push towards higher aesthetics – it gives you an immediate payoff.”

In the study, the reports deemed ‘aesthetically pleasing’ had a highly number of pictures and made tasteful use of colour.

Ansett said when it comes to annual reports, graphic design is about communication. “It’s about making things easy to find,” he says.

For businesses not keen on paying for a spiffy report, Townsend’s study did find a get-out clause.

“People are not aware of the effect of aesthetics on their financial decisions,” she said. “We found that when their attention was drawn to this issue they were able to overcome the bias and make wiser investments.”

So if you’re not going to cough up for a graphic designer, maybe a well-placed joke about your shareholders seeing through your plain presentation will do the trick.