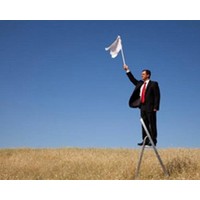 All it took was the merest sniff of a lift in consumer confidence for retailers to declare, tentatively, a truce in the discount price war. First came Terry Smart, the CEO of electronics retailer JB Hi-Fi. As he announced a lift in revenue and net profit – check – he said his company would be more “disciplined” about its approach to discounting to try to rebuild profit margins savaged in the past few years.

Then came yesterday’s announcement by Paul Zahra, CEO of department store David Jones, that his company would surrender its music and DVDs sales to JB Hi-Fi and online retailers by exiting the category altogether. Why? It is time to focus on margins. Total sales fell .7% for the first half of 2012-13 to $1,005.7 million from $1,012.9 million for the corresponding period of the previous year.

“The price war is over,” says Jon Manning of Pricing Prophets. “While [retailers] can’t go and talk to competitors and say you can do this with your pricing, [JB Hi Fi’s recent announcement] is legal price-signalling. They are saying ‘we don’t see this as a price war and hyper-competitive marketplace anymore. That raised the question: has that sent a signal to DJs as well?”

While these moves might signal the end of the sale-that-never-ends, which consumers have been enjoying in recent years, for leading companies and their suppliers the change in sentiment cannot come fast enough. Retailers know what they have to do: improve customer service. But they cannot do it while their margins are in the toilet.

Adrian Clerici, retail partner at accounting firm Pitcher Partners, says the more exciting innovation at DJs is its move to trial mobile payment systems, where staff process payments away from cash register using handheld devices. “They are trying to improve the customer experience, so they are face-to-face with customer service assistants talking about the products, not stuck behind a register,” Cerlici says.

Suppliers, too, have reached the limit of their tolerance for the discounting war. Supermarket suppliers have (finally) raised complaints to the Australian Competition and Consumer Commission (ACCC) about the pressure tactics applied by Coles and Woolies to force down their prices and demand unreasonable payments. The ACCC chair, Rod Sims, revealed the claims before a Senates Estimates Committee on Wednesday night.

From both the retail and the wholesale perspectives, the relationship between discounting prices and long-term survival is coming into sharp relief: the time limit is up.

DJs has chosen to fold its cards in one area where it cannot make enough of a margin because the retail model has moved so far out of its remit. It is always a tough choice for a department store, which is meant to carry everything we need. Zahra said that he wants to focus on higher-margin products like fashion and cosmetics. Clerici says: “There is certainly a risk if you focus too much on physical products that buyers need to have an emotional connection with. You might corner a market and enjoy higher margins, but then you do not have the turnover of the commodity market. It is a balancing act.”

Clerici says DJs’ move out music and DVDs is more a matter of logic than a statement about a new direction.

He says DJs’ brand position is strong, so culling some products will not damage its position in its customers’ minds.

Manning says that DJs has had to accept there is a more efficient way of buying music and DVDs than they can offer. “The CD had been unbundled and we can now buy individual tracks,” he says. “It is the same as a low-cost airline; you buy the seat and only buy the meal and entertainment if you want it. No one takes 36-exposure film down to the shop anymore; we print off the one or two snaps that we like. DJs has surrendered to the reality that there is a more efficient ways of doing things, and decided we had better focus our resources on being better with our blockbusters.”

Several retailers have committed themselves to simplification strategies as they start to pick up the pieces following years of discounting. Launa Inman, the somewhat embattled CEO of surfwear retailer Billabong, announced last year her determination to reduce the number of products, suppliers and brands, as did toymaker Funtastic’s CEO, Stewart Downs.

Simplification is not a long-term strategy, as Pitcher Partners’ David Knowles recently pointed out to LeadingCompany. It is a path to recovery, whereby companies consolidate strong brands and products, reduce risk and increase profits. But with reduced risk comes reduced innovation and probably reduced growth. The decisions about what to cut are difficult and risky ones – in periods of growth, leaders can afford to allocate risk capital to invest in many different things. Only one needs to do well to pay for all the others. “It is easier to get it wrong in a shrinking organisation,” Knowles says.

As they refine their offering, more retailers are making a decisive call on their pricing position: cheap, mid-range or premium. Manning and Clerici agree that retailers can do both, but Manning says it can send a confusing message to consumers. “If they want to be low price, they are best to do it under a different brand. They can use price, but tactically, so they may use cheap pricing on lead items, but that isn’t as damaging as having half the merchandise low-margin and half high-margin.”