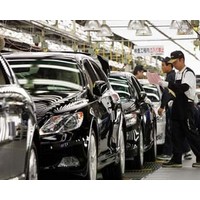 It took an earthquake and floods to finally knock off Toyota as the world’s largest car-maker. The company had reached the top by mass-producing reliable and affordable cars, using the acclaimed Toyota Production System (TPS). Tagged “lean production”, TPS reflected Japanese history and a culture of co-operation in the workplace. When assembly plants were opened in Thailand, TPS was adapted to local conditions. Researchers at the Australian School of Business have been exploring whether “lean” became “mean” in a lower-wage economy.

The philosophy known as the Toyota Way (“continuous improvement, respect for people”) was battered by the recall of nine million cars worldwide in 2010. That followed a messy dispute in the large US motor market over a sticky accelerator, a fault that dented the brand’s reputation for safety. Toyota was found wanting in its car design and response to consumer concerns. Looking better by comparison, US auto manufacturers staged a mini-revival with customers apparently thinking US cars were not so bad after all.

The setback caused collateral damage to the reputation of TPS and revived questions about such silver-bullet theories of business excellence, notes Vik Kortian, an expert in lean and Six Sigma management practices at the Australian School of Business. “There are a lot of factors in success, but it does not take much for things to go wrong,” he says.

Among those to contest the idea that a company could become an industry leader by following a simple formula such as TPS was Phil Rosenzweig, a professor at the International Institute for Management Development. Rosenzweig set out his arguments in his 2007 book, The Halo Effect … and Eight Other Business Delusions that Deceive Managers.

TPS emerged as a management phenomenon from the quality movement of the 1980s. It was lauded as best practice and emulated in other industries, from call centres to the public service. TPS involved multi-skilling, job rotation, task enlargement and workers participating in suggestions for continuous improvements on the assembly line. Termed lean because it eliminated waste at every stage of production, the system had its critics who claimed it put pressure on small teams of workers doing meaningless, fragmented tasks on the assembly line.

They saw Toyota’s production system as an outcome of trade unions being excluded from the 1960s compact of government and industry in postwar Japan. Subsequent labour shortages – and criticism of “death by overwork” in Japanese society – caused Toyota to modify TPS to emphasise “quality of work life” at selected plants by the 1990s.

This was inspired by Swedish “reflective” concepts of work design at some Volvo plants, where the production line was broken up into segments with buffers to make them more independent, tasks were functionally related, pay was for skill as well as performance, and more emphasis was put on ergonomics for workers.

Post-lean production was more worker-friendly in Japan but was not always exported to overseas factories as Toyota increasingly moved to lower-wage Asian destinations.

In Thailand, the production line is more lean than post-lean, according to a recent study by Australian School of Business researchers Thunyalak Weerasombat and Ian Hampson, an associate professor in organisation and management. When the researchers did a lean rating of TPS at Toyota Motor Thailand, they expected the worst. Thailand has no political labour party and successive military governments have obstructed unions, regarding them as potential sources of communist agitation.