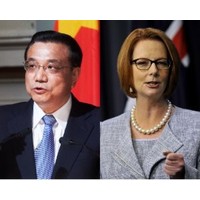 A free trade deal with China which has been under negotiation for close to nine years may never happen, trade minister Craig Emerson told a forum in Melbourne yesterday.

A comprehensive free trade deal, which would allow Chinese imports and Australian exports to cross into both countries without paying import duties, is “just beyond both countries,” Emerson told the Global Food Forum, according to a report in The Australian.

Instead, he said the government was focussed on an agriculture-only deal, similar to the one signed between China and New Zealand five years ago. The deal, the minister said, led to a tripling of its exports to China, led by dairy produce.

LeadingCompany contacted the trade minister’s office with a list of questions, but no response was received before deadline.

Peter Mace, the general manager of the Export Council of Australia, says it’s interesting the government is focussing on agriculture, as this has traditionally been one of the ‘sticking points’ in previous negotiations.

Perhaps because of this, China has reportedly responded to this agriculture deal by asking that it be allowed make investments worth up to $1 billion in Australia without needing to pass the Foreign Investment Review Board’s ‘national interest’ criteria. This $1 billion threshold is the same as the one currently given to America and New Zealand. Emerson has rejected this, saying: “we can’t do that – the community would not accept it.”

Mace says even a trimmed-down deal would be “wonderful if it happens”.

“This would be a great opportunity for our farmers. We view agriculture as the next resources boom.”

However, sectors that would miss out from an agriculture-only deal include things like services.

“China has a need for things like legal services and architecture, where Australian firms are strong.”

Mace says that even if a bi-lateral free-trade deal fails, Australia could still get free trade with China through the Regional Comprehensive Economic Partnership, which has been under negotiation since November 2012.

UNSW economics professor Tim Harcourt tells LeadingCompany SMEs now export more to China and South-East Asia than they do to Europe. “It’s not just about Woodside and Rio Tinto. There’s 10,000 SMEs exporting to China, if you include the ones going through Hong Kong.

“A free deal is necessary, but not sufficient. The most important thing for SMEs is assistance on the ground.”

“In China, it’s still a matter of who you know, and who’s in the local government. It can be very difficult for small businesses to find their way around that. So getting to the good partners and distributors, and getting your intellectual property established so you don’t get copied, those are key issues for SMEs.”