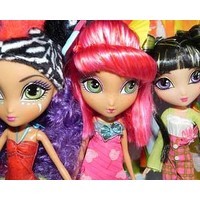 At toy retailer Funtastic’s AGM today, CEO Stewart Downs had good news for shareholders – the promise of the first dividend in five years as the company delivers a $10.4 million net profit after tax, or 6% of its $170.7 million revenue in 2011-12.

“We are saying we anticipate being able to declare a dividend after our first half results,” Downs tells LeadingCompany after the AGM. “We want to reduce debt by another $10 million. It is currently in the mid-fifties.”

The improved result comes after four years of losses and represents a 127% net profit after tax increase from 2011.

The magic formula? Downs says it’s going back to basics. “[We are] doing what we are good at. We are not scared to make the tough decisions so that all of our sales are about profitability.”

Here’s what simplification looks like at Funtastic: their toy brands have been slashed from 66 to 22, the number of stock-keeping units is down from 8,600 to 1,700, they’ve halved their warehouse space, their overseas suppliers have been trimmed from 28 to seven, and staff numbers are down by over 50% to 180.

Simplification is a great profit strategy, but it is not one that will deliver growth, says David Knowles, a partner at accounting firm, PitcherPartners. “Simplification is about saying where are we going to get the best returns. We focus our effort and that allows us to trim the sails and release capital as efficiently and effectively as possible.

“[The global electronics company] GE was famous for this. Its strategy was: if we are not number one, two or three, we are out. We are a major player or we don’t play at all.”

The idea of simplification is to go back to the tried and true products that are the most profitable – even if they are not the ones that deliver the most revenue. This can also allow companies to trim suppliers and other costs, like Funtastic has done.

Downs says: “We had one product where we didn’t want to be working with that supplier; we couldn’t make it sustainable. A couple of the bigger brands accounted for $25 million in sales but we made no money. At the end of the day, with where the business was at, it is all about profits.”

There is a national trend towards heavily-targeted, simplified businesses, Knowles says. “You do see a proliferation of niche businesses, and not so many broad-based conglomerates, although Wesfarmers is an exception. At the moment, businesses either are getting bigger – there has been plenty of consolidation over the past 10 years – or going micro. When they are going smaller, it is about having deep expertise.”

Paul Hunter, CEO of the Strategy Management Institute, says simplification is a good thing to do. “It is very much an operational thing, it about getting back to basics and doing what you do well. Organisations need to grow from a strong position.”