Want to be charming? Of course you do. Here are three essential tips

Want to be charming?

Of course you do.

Your entire life will be better, and so will the lives of everyone around you — that is, if you’re doing it for the right reasons.

There’s nothing creepier than the idea of ‘turning on the charm’ to get something you want. Aim to be charming all the time or just forget it.

Some people have ‘expert blindness syndrome’, which means they’re unable to pick up on signs they’re talking to someone who may, in fact, have a Nobel Prize for achievements relating to the topic at hand. So they talk over them and offer embarrassing opinions.

Tragically, this is a condition mainly affecting men.

Actual scene I witnessed at school sports: a small, soccer kid breaks his arm. It is a savage break, both bones snapped clean, half his forearm flopping around. The kid is going into shock. Fortunately, one of the team mums is a working nurse. She sets about dealing with it, calling for ice packs and checking essential signs.

Up comes a dad from the other team, ready to take command of the situation. He starts yelling at her for applying the wrong treatments.

She asks: ‘What are your qualifications?’

The online world is full of similar exchanges between mansplainers and women. They should end when she says ‘… because I did a PhD on that exact subject’, but even that isn’t enough to stop a final ‘well, actually, I think you’ll find …’.

Smart, accomplished people are usually secure enough not to start every conversation with some Trumpian boast about how great they are. When you meet someone new, it’s important to consider this possibility. Even if they’re not a recognised expert, there’s a good chance they might know more about the topic than you.

It pays to ask better questions and listen more before you unleash your genius ideas like some bar’s resident drunk.

2. Don’t do your pre-prepared material

I wrote a couple of paragraphs about this essential skill, then I saw this glorious New Yorker cartoon that said it much better. 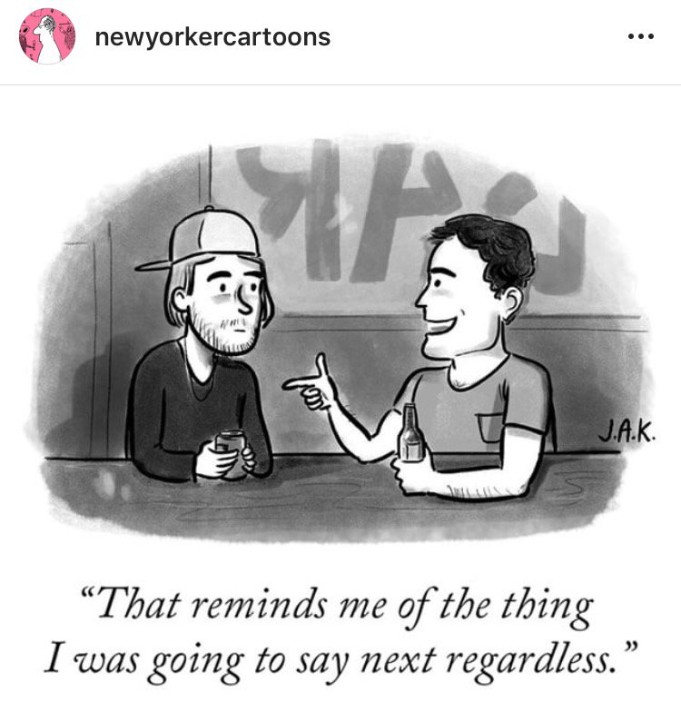 3. Conversation is not poker

This one will take every bit of your strength to pull off, grasshopper, but will give you next-level charm skills.

You should be able to read the signs of people telling a story they know to be a winner.

They’ll be relating how they were on a crowded flight and the kids were kicking the back of the seat in front and they went to apologise after the flight and OH MY GOD it was KELLY ROWLAND HOW AMAZING IS THAT and she was so lovely about the kicking.

And as you’re listening to that story, it reminds you of the time you were in an airport lounge and who guess who walked past and said ‘hello’. It was BEYONCE, and you can’t wait to tell your friend because it will show you both have SOMETHING IN COMMON AND YOU ARE PERFECTLY PLACED TO UNDERSTAND JUST HOW GREAT IT MUST HAVE BEEN. WHAT AN AMAZING COINCIDENCE!

So you tell them your Beyonce story as soon as they finish theirs, and wait for them to give you a high-five, but they look down and say something like ‘oh, that must have been cool’ because you have trumped their story like some casino high roller casually producing a last-second royal flush.

You have not impressed them. You have been a charmless conversation pig.

It happens all the time. You buy a new Toyota, someone tells you about their new Tesla. You discover a cure for bunions, and someone else at the conference just cured influenza.

Here’s how to do it right.

You: How was your week?

Colleague: Great! I won a new client. It’s probably our biggest win this year, might be worth a few hundred thousand to us, so excited to get them on board.

You (who also just won a new client worth nearly a million, a fact that you are desperate to drop into the conversation): That is brilliant! Nice work. Tell me, how did you do it?

And you carry on the conversation, and make them feel like the absolute star achiever they are, even though the effort of not mentioning your own achievement makes the veins stand out in your forehead. It will pass, but your charming impression will last.

As a bonus, they will eventually find out about your big achievement from some other source and will realise that you are a saintly human being, and they will love you forever, at least, in a respectable business-love sort of way.

And sooner or later, as a direct result, nice things will happen to you.

When in doubt, remember this handy 19th-century British political anecdote. Jennie Jerome, who became Winston Churchill’s mum, dined alongside Britain’s leader of the opposition William Gladstone one night, then prime minister Benjamin Disraeli the next.

Disraeli beat Gladstone in the 1874 election.

NOW READ: Forget marketing, the secret to business success is being well-liked

NOW READ: Why technology is not the answer to your productivity problems