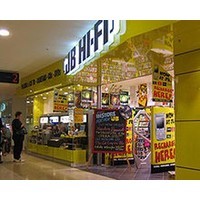 The retail industry hasn’t received any good news for a while now, so it’s no wonder shares in JB Hi-Fi surged 13% yesterday after the company announced its net profit increased 3% in the first half of the year to $82.1 million.

JB Hi-Fi has had a tough couple of years, despite relatively stable financial results. The company’s shares are some of the most shorted on the ASX. But since the start of the year, JB Hi-Fi’s shares have increased by 21%.

But the company’s latest result doesn’t just come from a customer base ready to spend again – continued reports from consumer confidence analysts show Australians still aren’t ready to hand over their cash.

Instead, JB Hi-Fi under chief executive Terry Smart has increased sales through an increasing devotion to the online store and by focusing on cost-cutting to improve margins.

It’s a testament to the company’s strength that in the last six months, like-for-like sales dropped by 3.5% while gross margins increased by 30 basis points.

Not only does Smart say the business is working on new ways to increase sales, it’s also refusing to discount. In fact, Smart says the discount wars of the past few years may disappear.

“The market is still very aggressive – the pricing you still see on a daily basis makes you shake your head…but what we’re saying is we’re not going to see what we saw last year with 40% and 50% off, which you just can’t do in these categories,” he told The Australian.

With JB Hi-Fi staying ahead of the rest of the troubled consumer electronics market, here are five lessons you can take away from the company’s strategy:

The retail market has been on a discount rampage for a few years now, partly due to the global financial crisis but also partly due to eager retailers battling against consumers who simply don’t want to spend.

And while JB Hi-Fi was a participant in that, Terry Smart says the end is in sight.

“In the long term we have to be globally competitive, so we have gone to suppliers to achieve as close to global pricing as possible,” he told the Herald Sun. “It’s still very aggressive, but we are not seeing those really heavy 50% discounts.”

Experts have always said retailers need to know when to discount and when to ensure prices remain at a sustainable level. It seems Smart understands the future of the business – and the industry – will become more solid when the discounts disappear.

While JB Hi-Fi may not have the greatest site in the world, there is no doubt the company has a good distribution system and has managed to pump a lot into the company’s online operation.

So much so that online sales grew by 40.3% in the first half of the year compared to the same period in 2011, totalling 2% of all sales.

That equates to $36.4 million in purely online sales. Harvey Norman may only be doing as much as half that, and certainly isn’t putting as much effort into its own online store.

JB Hi-Fi’s strength lies in combining both the online and offline channels, allowing customers to check stock levels online and reserve items for pick-up. Although only 2% of sales may be online, that figure is surely set to rise.

When you can’t sell, focus on cost-cutting

The best-performing retailers understand that by cutting your margin, you’re putting yourself in danger.

JB Hi-Fi revealed over the first half of the year it had increased its gross margin to 21.5 – up 30 basis points – as discounting was ramped down. Not only is the company able to do this through raising prices, but it simply knows how to manage its supply chain and look for cost-cutting elsewhere to maximise profit.

The company’s challenge will be maintaining that margin in an environment which remains discount-heavy.

Don’t roll out stores too quickly

Although JB Hi-Fi delivered a positive result for net sales and profit, like-for-like sales dropped by 3.5%. But there’s wisdom in this strategy.

The company currently operates 174 stores, and plans to open 214. But while retail analysts believe this will harm future sales growth, it’s also a sound strategy – other retailers have been harmed by too aggressive an expansion plan. The fact Terry Smart only plans to reach 214 stores before taking stock and deciding what to do next is a good lesson – never expand further than what you can afford.

All electronics retailers are under siege and categories such as televisions decline. Overall the company recorded an 11.2% fall in television sales.

Smart businesses understand expansion and diversification is the key to survival, and that’s exactly what JB Hi-Fi is doing.

Already operating a streaming music service, the company said it plans to start offering downloads of movies online and move into other categories as well.