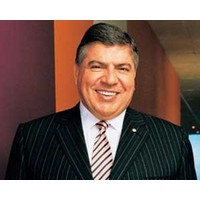 “Aussie John” Symond has sold most of the business that made him rich.

Yesterday the previously independent home loan broker dropped a bombshell, saying it was selling another 47% of itself to the Commonwealth Bank, taking the bank’s ownership stake to 80%. Symond keeps a 20% stake, and has signed on to stay with the company he founded until at least 2016.

“It’s business as usual for Aussie,” he said in a press release yesterday. “The Commonwealth Bank will give us additional strength to grow and service our customers. We will continue to offer a wide range of options, providing consumers the best options for their needs.”

Symond had back-to-back media interviews all day. Our SmartCompany colleague Cara Waters was among them, and put some questions to Symond on our behalf.

Symon says the sale enables him to build a “bigger, better Aussie”, and that this will be good for customers. The Commonwealth Bank has been a minority shareholder in Aussie Home Loans for four years, during which time Symond says he was happy with how the bank had operated: hands off.

As for how the sale affects his independence, Symond says: “We have tried very hard for 21 years to earn the trust of consumers and we have got a lot of runs on the board. I ask them to trust us; time will tell.

“At the end of the day if we don’t have compelling products and services at exceptional prices I don’t expect people to support us. I’m hoping to reach out to even more customers and grow the business.

Branding expert Michel Hogan says Symond has lost some measure of credibility though the sale.

“His credibility starts to feel hollow now. It’s harder for him to turn around now and claim any kind of independence.”

But Symond defends the integrity of his business. “We have demonstrated our fighting for consumers for 21 years.”

Symond says competition is still healthy in the Australian home loans market despite the impact of the GFC.

“The global financial crisis really knocked out the non-bank lenders,” he says. “Non-banks accounted for 15% of all new home loans in the 2000s, but now it’s less than 1%.

“The good news for consumers is the big banks are struggling to attract market share in a consumer market. [So] at this stage consumers have not lost out. We expect banks to make a commercial return but we don’t want banks to gouge customers with big fat fees. To date they have behaved very well.”

Symond has built his career, and his business, on being a vocal critic of the big banks. Aussie Home Loans offers a comparison service through which its mortgage broker can negotiate the best terms and interest rates on loans for customers.

Will Symond still be able to convince customers he’s on their side now that his company is majority-owned by one of the major banks?

Simon Rowell, the managing director of Brand Intellect, says these types of mergers matter to customers.