Pizza, cash and strange due diligence 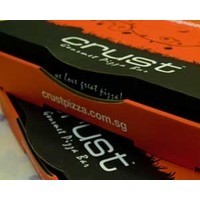 Whatever Crust Pizza’s secret is, it must be good.

The gourmet pizza chain, which this year celebrated its 10th anniversary, accepted an acquisition offer from Retail Food Group in August for $24 million. The sale landed the Crust Pizza’s founders, Costa Anastasiadis and Michael Logos, on the Young Rich List a week ago.

But yesterday, Retail Food Group, the company behind brands such as Brumby’s bakeries, Donut King and Michel’s, announced it would pay almost double its original offer for the chain – $41 million in total, of which $25 million is to be paid upon settlement at the end of this month ($22 million cash, and shares worth $3 million), and a further $16 million at the end of the year.

To fund this, Retail Food Group will conduct its first capital-raising since 2006. The company is in a trading halt until it figures out the details, which can’t be thrilling for its shareholders, given the company announced a completely different price for Crust Pizza in August.

According to Retail Food Group’s ASX release, the revaluing came after it took a closer look at Crust Pizza’s books.

Retail Food Group’s CEO Tony Alford said in the release that “the company’s due diligence enquiries not only provided further comfort regarding future Crust contribution to [Retail Food Group] earnings; they have validated our initial interest and motivation for the transaction itself.”

Retail Food Group is in the middle of moving away from its locations in shopping malls, where rents are rising and it is heavily dependent on major supermarkets for foot traffic, to stand-alone stores where it can hopefully convince customers to spend more per visit.

The company says the strategy has so far been successful. In August,  Retail Food Group said customers at Donut King standalone stores were spending, on average, $2.50 more than those who visited the chian in shopping centres.

Crust Pizza fits into this, priding itself on providing a high-quality gourmet-pizza experience.

But you have to wonder what happened during the first round of due diligence, the one conducted before Retail Food Group first offered to buy Crust Pizza. How much “further comfort” about earnings could lead the food company to nearly double its price?