Rupert and Wendi cut the knot: Lessons in divorce-proofing a business 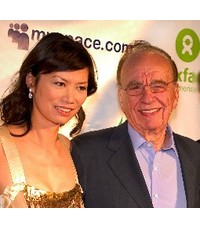 After 14 years of marriage, Rupert Murdoch and his wife of the lightning-fast reflexes, Wendi Deng, are getting divorced.

In an application for divorce filed in New York, the media mogul said the marriage had “broken down irretrievably”.

Murdoch and Deng were married in 1999, when he was 68 and Deng was a 30-year-old junior executive at News Corp’s Star TV in Hong Kong. Murdoch had finalised his divorce from his second wife, Anna Torv, just 17 days earlier.

Murdoch’s numerous divorces (this is his third) provide plenty of lessons for other business owners keen to protect their assets.

Marriage breakup has seen the erosion of many a fortune. For example, actor John Cleese toured the world in 2009 with his comedy show, ‘How to Finance your Divorce’, no doubt inspired by his $US19.7 million payout to wife of 17 years Alyce Faye. Local billionaire Gerry Harvey paid Lynette Harvey a huge stake in Harvey Norman when the couple divorced in 1982. And just yesterday, oil tycoon Michael Prest lost his fight to keep his former wife from getting a share of the assets held by companies he controlled.

When Murdoch divorced his second wife in 1999, she was awarded $1.7 billion in assets. However, as the couple lived in California, a community-property state, she could have received half of the Murdoch fortune (then valued at more than $7.8 billion), according to The New York Times.

She didn’t, due to Murdoch’s preparations before they got married, precautions it’s believed he also took before his marriage to Deng.

But a prenuptial agreement isn’t enough. Entrepreneurs need to think further if they want to protect their assets, as even a solid prenuptial agreement can be overridden if a partner nonetheless contributes to a business on an unpaid basis, warns M+K partner Andrew Douglas.

“If your partner becomes involved in your business, it must be on a proper contractual basis,” he says.

“Otherwise, there’s a concept called ‘constructive trust’. If a person helps out with paperwork but isn’t appropriately remunerated for that, they can say they were a true partner in the business.”

But even so, the partner who is less involved in the business, even if they can get out of a prenuptial agreement, is often at a disadvantage when it comes to the dividing of assets, says Tindall Gask Bentley partner and divorce lawyer Jane Miller.

“There tends to be a lot of dispute around what the business is worth. Particularly around start-ups, which often have potential but have only been trading a few years. That makes it hard for a forensic accountant to put a value on the business,” she says.

“Say the husband’s the one who is the CEO and the wife’s role has been much more of a support one. She might not have a good understanding about the business’ income, and how much the business is worth, and that can affect how much she ends up getting.

“While waiting for the property settlement, you sometimes see one of the business owners try to run down a business, or cook the books so it doesn’t look like it’s doing so well. There’s a lot of scope to manipulate the situation.”

In the absence of a prenuptial agreement, it makes little legal difference whether one or both members of a marriage work together in a business, she adds. The assumption is that it’s a partnership, resulting in the business being either split between the members, or one member having to buy out the other. In rare cases, the former partners will agree to keep working or owning equity together in the business, even though their marriage is over.

Both Miller and Douglas make a point of stressing that, legalities aside, divorce can be fatal for family businesses.

“The process of dividing up the assets can go on for many months, even years. If you’re trying to run a business together in that time, there can be plenty of acrimony. Say the husband is a plumber and the wife handles the books. You can have information not being exchanged between the two, with staff caught in the middle of a difficult work environment. The implications of trying to run a business together for six or 12 months can be very difficult,” says Miller.

Douglas says it’s a terrible mistake to give romantic partners equity in a business. “If the relationship fails, they have business leverage over you.

“Imagine if things go wrong. Your mind won’t be on the success of the business. And taking your eye off the ball is something you can never do in a small business, because no one will pick up the slack. What you often see with matrimonial breakup is business failure, not because of the business being split, but because of drawn-out boardroom battles that distract everyone from making money.”

Douglas says to avoid the messiest of divorces, businesses need to have the difficult conversations and document their plans in case of divorce.

In Murdoch’s case, it’s his third marriage breakup. We can expect him to have availed himself of the best legal advice money can buy, leaving Deng at a significant disadvantage.

But she might have one card to play. As Michael Wolff wrote in the Guardian this morning, she has been Murdoch’s closest confident for years. No doubt he’s a man with much he’d rather keep private. And Deng knows all his secrets.