Why is the second wave of a complex problem harder to deal with? And how can you make it easier?

Why is the second wave of a complex problem harder to deal with and how can you make it easier?

I live in Melbourne and it’s fair to say that we’ve had a sobering couple of weeks.

We’ve gone from feeling pretty pleased with ourselves for ‘winning’ against COVID-19 and heading into economic recovery, to suddenly returning to stage four lockdown for six weeks.

People require permits to move beyond their suburbs and access childcare.

It’s hard and painful for many, but necessary.

In the case of COVID-19, the second wave is an inflection point, when cases go from reducing to increasing.

However, this phenomenon is not restricted to a pandemic.

Complex problems are rarely tackled in one go and are a series of ups and downs. That’s one of the factors that makes them tough to tackle.

The second wave is often harder than the first. This article helps to explain why and shares six practical strategies to help you face into the second wave of any problem.

The four stages of a problem

When we are stumped by a complex problem (especially one in which the stakes are high) we go through a number of stages.

First, we experience ‘turbulence’ and feel like we’re caught in a washing machine of confusion.

Second, we start ‘transitioning in’, facing the problem. We get our bearings and start asking questions. ‘Where am I? Where do I want to be?’ What do I need to do next?’

These first two stages are like rolling a boulder up a mountain. They are hard work and we need to draw on significant emotional and mental energy to keep pushing forward.

We might talk about these times as having to ‘dig deep’ or ‘brace ourselves for the worst’. This kind of thinking gives us emotional scaffolding and helps keep us strong enough to press forward, despite the difficulties.

It is this resolve that helps us to reach the top of the mountain when we can shift from dealing with the here and now, to looking towards the future.

It’s what Angela Duckworth, in her bestselling book of the same name, calls ‘grit’.

Finally, we reach the bright side of the mountain. We start the third stage of ‘transitioning out’ of the problem and start to experience that winning feeling of momentum. We know what solution we want and we know how to deliver it.

Then finally, we reach the fourth stage, ‘take-off’.

We’re like a plane hurtling down the runway. Everyone is on board, we’ve got a plan, we’re clear about our destination, and we have everything we need to get there.

Thud! An unexpected obstacle lands squarely on our runway.

In an instant, all our plans, hopes and possibilities fall out of the sky and collapse in an untidy pile of rubble on the ground. 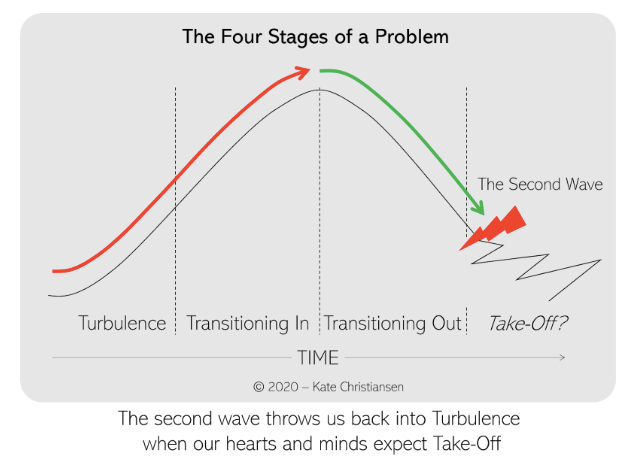 As one of my clients said this week, the second wave of a problem can leave us feeling “absolutely gutted!”

She was describing how she felt about her business having to withstand another stage three lockdown.

“I wish we’d just kept the first lot of restrictions. It would have been easier than where we are now,” she said.

Why does a second wave feel worse than the first? There are several reasons.

When we’ve been through a crisis and feel like we’re getting back on track we are vulnerable.

We rely on the downward slope to recharge and build up our energy reserves.

When an unexpected problem occurs at this point, we don’t get the opportunity to recharge. We can feel like we’re running on empty both mentally and emotionally.

The second challenge is that we feel like we should be in a better place.

Why? Because we believe we’re still on the ‘downward slope’ of the mountain.

We worked hard to get to the top, so we can feel ‘ripped off’ that the reward we expected is not there.

This kind of thinking can lead to negative energy. Instead of channelling whatever energy we had left into something positive, we waste it.

We feel less certain and confident

The third reason that the second wave can feel worse than the first is that it rocks our confidence.

We find ourselves asking: ‘Can I do this a second time?’ And a little voice answers: ‘I’m not really sure that I can.’

When we feel uncertain, we’re more likely to feel afraid, which in turn prevents our problem-solving brain from being able to work its magic.

We love the feeling of momentum

The longer the period of time between the first wave showing improvement and the second wave emerging, the harder the latter is to deal with.

We’re accelerating and feeling the sense of satisfaction that accompanies momentum. We tend to feel more energised and optimistic, even over-optimistic.

Therefore, when the second wave arrives, we want to defend our optimism and hold onto that feeling of momentum we’ve fought hard to achieve.

This leads to delayed action which means that the second wave ends up being more intense than the first.

If you’re experiencing the second wave — of the pandemic or any other complex problem — what can you do about it?

1. Acknowledge the setback and recognise that it’s completely normal to feel the way you do.

2. Act sooner rather than later.

Your brain will try to convince you that everything is still OK because it wants to maintain equilibrium.

If you find yourself thinking ‘it’s no big deal’, keep it in check by asking, ‘really?’

Take a step back, even if it’s just for half an hour, and give yourself permission to stop and think.

4. Refine or redefine your problem.

The likelihood is that the problem you were solving before the second wave occurred is not the same one you need to solve now.

You may need to think in shorter chunks of time. Monthly? Weekly? Daily?

Choose your timeframe and just focus on what you need to do during that chunk of time.

5. If you have a team, bring people together and allow people to express their feelings of frustration.

Then, draw a line under it by focusing on the here and now.

Break what needs to be done into achievable chunks. It makes it easier to make progress and to build momentum when you are running out of energy.

Remember, the second wave is often harder, so give yourself permission to be disappointed and frustrated.

Be gentle with yourself and your team, then focus on making tiny steps at the start.

The first goal is to stabilise, the second is to make progress.

NOW READ: “It has pushed me and challenged me”: How COVID-19 led to international clients for this Melbourne Pilates studio

NOW READ: Sick of half-baked ideas? How the principles of making sourdough bread will help you rise as an innovator