The floating fortunes of our iron ore barons 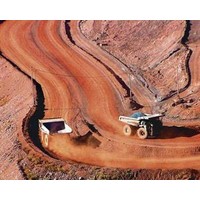 Despite the recent fluctuations of the iron ore price, producers such as mining billionaires Andrew Forrest and Gina Rinehart entered the iron ore market with eyes wide open and understand the long-term risks, but also the short-term opportunity.

This dynamic plays out by those who take great delight each time the iron ore price tanks and encourage us to eat the rich each time it spikes.

Rinehart and Forrest as well as their rivals in the industry, are captive to the fortunes of the Asian steel producers and must continually turn the iron ore tap on and off when demand fluctuates.

Unanticipated mine closures and job cuts as well as rapid expansions will be a feature of this industry for at least another 30 years.

Australians are hesitant to celebrate wealth creation. We all expect the rich to behave in a certain way such that the privileges that accompany wealth are counterbalanced by its attendant responsibilities. An immodest display of wealth is a swift and sure method of estranging oneself.

But do present day mining magnates really behave in this way? Much of the wealth of Forrest and Rinehart is heavily concentrated in the relative fortunes of their companies.

Indeed half of Rinehart’s wealth is embedded in the worth of a single mine, Roy Hill. Profitable iron ore mining demands a level of output that achieves a critical mass of a scale sufficient enough to cover the fixed costs of production. In modern times there is no such thing as a small mining entrepreneur and gold prospectors seeking their fortune somewhere in the Klondike do not count.

Unlike other wealthy individuals, Australia’s mining magnates are heavily criticised. This contrasts to the US, where rich individuals like Warren Buffet are able to maintain a certain perspective and are philanthropic because they have already crystallised much of their wealth and their business empires are to a large degree self-sustaining.

The real wealth of Australia’s mining entrepreneurs is embedded in the fortunes of their companies and success is almost entirely dependent on the global demand for steel.

This is not assured. Obviously, their wealth is not immune from volatility and will continue to fluctuate with iron ore prices.

To date, their fortunes have been greatly assisted by the index pricing of iron ore, which has reshaped the production landscape.

Unlike commodities, where the availability of liquid spot and forward markets allows prices to quickly respond to changes in demand, iron ore price agreements were dominated by an annually agreed benchmark price up until 2008.

While benchmarked prices offered cost certainty to Chinese, Japanese and Korean steel producers, many smaller smelters took advantage of the opportunity to buy iron ore at annually fixed prices and on-sell it to other steel producers who were short of supply in the spot market.

The spot market in China traded large volumes of iron ore imported from India and elsewhere. Smaller smelters were able to buy iron ore at $100 a tonne from the large producers and then sell the same parcel for over $300 a tonne on the spot market. For many smelters, it was more profitable to cease steel production altogether and simply trade iron ore.

One of the largest producers of iron ore, BHP Billiton, took the initiative to eliminate this practice and ensure that upstream producers, rather than intermediaries, captured the full margin. With the help of two investment banks, BHP Billiton initially took a loss-making short position of one million tonnes of iron ore to inject sufficient liquidity to create a market with reliable index prices.

This was followed by another short position several months later to sustain the market’s development. It was reckoned that sacrificing a short-term loss was a small price to pay for the benefits of capturing the full margin that producers were entitled to receive.

While buyers greatly resisted the new price regime they were powerless to stop it. For the first time, prices would not be determined by the dealings of a select number of producers and consumers at the negotiation table. The market for coking coal, also essential for steel production, experienced a similar transition.

This market is now largely self-sustaining and is reasonably liquid to reflect short and long-term supply and demand.

This has offered newer entrants to the iron ore market like Fortescue and Hancock a unique opportunity to earn a fair margin on their product without the inefficiencies created through price negotiation that previously characterised the market.

Index prices are now observed with relative transparency, allowing for a more refined picture of expected long-term dynamics. The price transition has allowed mining companies to better manage capital expansion planning and future cost control. Along with the recent increased use of contract mining, iron ore producers can easily cut production when prices recede and ramp up production again when they rally.

Historically, margins earned on iron ore are very low and booms have always experienced much shorter duration than busts. The index pricing of iron ore has thus greatly changed the production landscape since junior players can more easily adjust output to changes in price.

For Forrest and Rinehart, among others, the rapid accumulation of wealth is to some degree, a matter of being in the right place at the right time. They both have the requisite appetite for risk that is essential for such ventures. But they must be prepared to quickly alter direction if conditions dictate.

History is replete with entrepreneurs who saw opportunity and invested their personal wealth and reputation at a critical period but failed to adjust when the global economy shifted.

The huge empires of railroad entrepreneur Samuel Insull and steel producer Charles Schwab collapsed when global conditions changed faster than they could respond.

Twiggy and Gina could learn from the lessons of these and other failed empires while keeping a close eye on the iron ore index.