The mistake most businesses are making about digital

‘Digital’ isn’t just IT – it underpins the entire organisation

If you’ve visited this blog before, you may well be tired of hearing it. Yet the issue is still as prevalent as ever.

I’m talking about the perception of ‘digital’ in many businesses today.

On the one hand, it’s easy to see how the misconception occurs. On the other, once you grasp that ‘digital’ is about new ways of doing old things and not the technology that does it, it’s equally easy to apply to your organisation.

At its most fundamental level of course, the term ‘digital’ refers to the binary system that computers read to carry our commands.

It’s basically a series of ‘0’s and ‘1’s that computer programmers organise into commands and in turn software, websites, telecommunications, files and so on.

Essentially it’s the ‘software’ of the IT world and all the files that software reads and displays.

Digital everywhere
Pretty much any functionality that a computer or computerised equipment (including smartphones, iPads, cars and ‘Internet of Things’ equipment) offers does so ‘digitally’.

So if it’s about computers, it must belong in the IT department right? 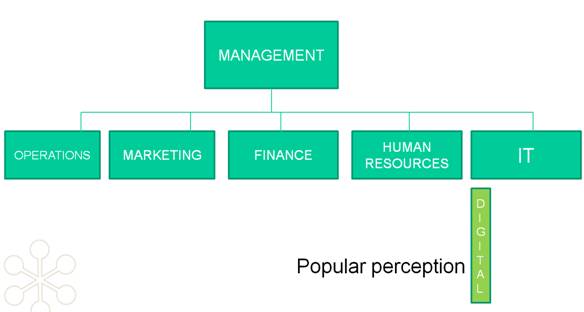 Quite clearly IT departments need to be well versed in what digital technology can do for organisations.

Where the mistake is being made though is allocating the digital task to IT when it really needs to be brought into the fold of the department requiring it.

Take your ‘digital agency’ for example. Digital ‘agencies’ (originally a mis-used term but since Adwords and Facebook and so on emerged, it is now accurate) pretty much manage all of the marketing communications activities that occur on computers, smartphone and devices.

They emerged for two reasons: firstly because traditional advertising and communications agencies knew very little about the emerging digital ‘space’ and secondly, to save advertising agency executives the embarrassment of managing something they knew absolutely nothing about.

Yes point two is tongue-in-cheek, but also not far from the truth in an industry that became the fastest growing in business history.

A third reason is that digital communications were quite unlike traditional media and agencies were still learning how to make money from it. By setting up as a separate entity, it could fail and not bring down the traditional mothership with it.

But in line with the ‘whole of business’ theory on digital, many of these digital-only agencies have since been brought back into the fold of ‘traditional agencies’.

Instead of collaborating with outside digital agencies, these new hybrid agencies are doing what traditional agencies have been doing for decades: pulling together the relevant resources to plan, create, execute and measure marketing communications campaigns, be they traditional or digital.

Of course this makes perfect sense. Why duplicate management, administration, account service and infrastructure when the marketing objectives both agencies need to deliver are identical?

Digital technology means the capabilities are far more extensive than traditional marketing could ever deliver – and then there is the matter of seamless convergence with sales, operations, customer service and so on.

Back to the fold

The need to push ‘digital’ out of the organisation as a separate entity has since and rightly been reversed.

This thinking of digital as a separate entity, instead of simply a different way of doing things departments already do, is not restricted to advertising and marketing.

Organisations everywhere are asking IT people to actually manage different business tasks – often when the are poorly qualified to do so – instead of enabling existing departments to digitise aspects of their business to keep it within the department.

However, this is the digital tail wagging the business dog. Sure, the assistance required might be plentiful, but digital predominantly needs to be part of the existing staff’s bag of tricks rather than one that hangs off to the side of each department.

How digital are you?

From a skill set perspective, employees need to ensure they are getting the digital training they require to properly do their jobs.

Otherwise they may well be replaced by someone who does.

The challenge then for smaller business operators is to engage people – either staff or outside services – that are able to conduct what they’ve already been doing in a digital way, rather than just blindly try to hand it over to an ‘IT person’.

Once this difference is understood and embraced, your business will soon be humming on all six, albeit digital, cylinders.