Time for a break from virus advice, let’s look at what we business people can learn from the world’s favourite peroxide-mulleted, tattoo-eyelinered, polygamous, murder-conspiring tiger farmer, Joe Exotic.

What is it about Tiger King?

It’s a feel-good show, in the sense that no matter how low your self-worth, you can safely say, ‘every single person on this show is worse than me’.

1. Focusing on your competitors turns you into them

I’m not saying don’t be competitive. It’s heaps of fun and gets you out of bed in the morning. The problem is when you focus relentlessly on competitors as your only source of inspiration.

That won’t help you achieve greatness. Because people in almost every industry are — from an outsider perspective; or in other words, your customer’s viewpoint — pretty much all the same.

Let’s look at the full set of Joe’s big cat zoo competitors that appear in the show. Carole Baskin aside, can you even tell them apart?

It’s wall-to-wall middle-aged guys with the full catalogue of Bad Things To Do With Grey Hair: mullets, ponytails, goatees, et cetera. They dress in way-too-old-for-it clothes, such as jeans from heinous brand True Religion.

They have multiple much-younger partners, largely treated like possessions (“Privately Owned By Joe Exotic” pelvic tattoos and so on), and a management-by-cult approach to business.

Their view on competition is: if dominant zoo owner Doc Antle has five wives, dammit I’m going to have seven.

If you Google any of them — I had to do that to assemble the photo line-up — almost all are now facing various charges relating to being lifelong scammers.

Most of us would look at these grifters and think: ‘Haha, as if I’d run my business like them, I’m so much better than that.’

Why so many businesses seem identical

When business people look for inspiration, they mostly look to the biggest in their field. So if your business is E-Z Drain Cleaning, you look to market leader Drain Wizard.

You know how the meetings go. ‘Wizard now have logos embroidered on their pants as well as their shirts and caps! We have to do that or we’ll fall behind!’

And that’s why, to customers, most people in each industry seem identical. Tradies. Financial planners. Real estate agents. Everyone.

As individuals, perfectly competent and likeable. Then interview a few of them and it’s like meeting the same person over and over. I’m pretty sure my own industry feels that way to our customers, they must wonder, ‘what’s with AV techs all wearing sunglasses on top of their head indoors?’

Those tiger zoo owners didn’t look to Cirque Du Soleil or Disney or others that have taken entertainment business to a different level. They just obsessed over each other, endless mental inbreeding that magnifies all their worst characteristics until you get … the single maddest TV show you’ve ever seen.

Then they go to jail.

Even if it’s just as a mental exercise, ask yourself how successful companies in completely different fields would approach your business. How would Amazon approach that drain cleaning business? How would Dominos?

2. The adversarial approach is stupid and expensive

Shakespeare would tell you that your hero or heroine is nothing without a worthy nemesis. In Joe’s case, it’s Carole Baskin, gold medallist in the Crazy Cat Lady Olympics.

And what happens to Shakespearean heroes and heroines? Yep, they all die.

Partly because he wasted so much time obsessing over what Carole was up to and making insane videos about her.

But mainly because he couldn’t resist getting into endless legal battles with Carole and her creepier-version-of-Prince-Charles husband, Howard. 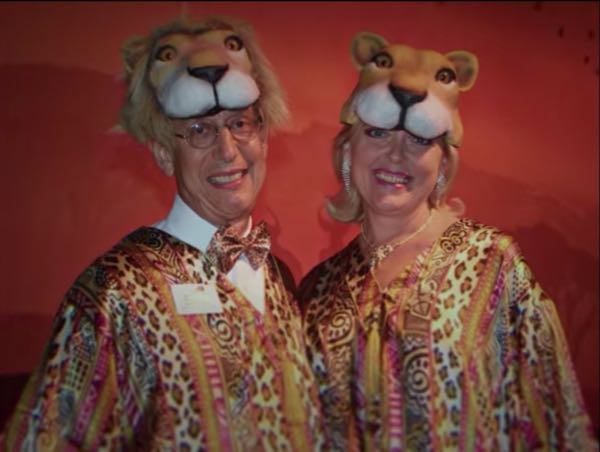 The Baskins are not people you’d approach at a networking function.

Here’s how to work out if you should get into an adversarial legal battle: is there at least $500,000 at stake, and are you OK about dropping an absolute minimum of $100,000 on it and still not winning?

Legal battles are for huge companies and you can’t afford them, even though they look cool on TV.

Use your negotiation skills to sort your shit out in person with your enemies. It’s an essential business skill. We’ve run a national business for 13 years, dealt with a good range of scoundrels, and haven’t used lawyers to do any fighting. It’s saved us a tonne more money than we could ever have recouped in court.

3. Being the worst boss ever is a business model

Current management practice goes: treat your people better than other companies and that investment will pay off long-term. That’s one approach.

Another is to treat your staff like garbage. Brutal hours, low pay, no career advancement ever, pitting staff against each other in creepy competitions to test their loyalty.

Big cat zoos are like that but worse. Staff get $100 a week plus accommodation, described by one as “we live in horse stalls, basically.” Other than Carole Baskin, who makes them work for free “because people will do that”.

Staff get yelled at a lot by management, who are usually armed and trigger-happy when displeased.

At Joe’s zoo, a weekly truck turns up with expired-date meat from Walmart, earmarked as cat food (later used to lower food costs at the new “Pizzaria”). The staff are all over that truck, picking out their own meals for the next week, because they don’t get paid enough to buy food.

Sounds bad, doesn’t it? Yet often it works. I’ve known quite a few companies over the years run by creeps and sadists and they’re perfectly viable businesses. They don’t even offer the fringe benefit of unlimited adorable tiger cub hugs.

As with big cat zoos, the staff just seem to hang in there. Talk to them and they roll out a litany of grievances. You ask: why don’t you just leave? They say: ‘Oh, it’s just not the right time at the moment. I really need this job. Better the devil you know.’ And a host of other excuses.

Meanwhile, their boss is rolling in cash and sleeps soundly at night.

A common thread from these work victim conversations is: ‘Things are just about to change. We’ve just about turned the corner. I can feel it.’

It is not going to change, ever.

Like any abusive relationship, that boss has ground their staff’s self-worth down so far they don’t think they’re good enough to get out.

How devoted are they to their terrible job? One of Joe’s staff has her arm stripped to the bone by one of her stripy friends. Cut to the anguished Tiger King: “This will be the financial ruin of me!”

She chooses to have the arm amputated rather than create ongoing bad PR for Joe. She’s back at work in five days.

I’m not suggesting you should run your business this way. If you work in one of those places, GET THE FUCK OUT OF THERE NOTHING IS GOING TO CHANGE.

As Joe’s legal bills mount up and his business gets further into the red, a White Knight arrives: Jeff, a “businessman”.

“He’s a businessman for sure, he’s got a Ferrari,” they say. “Great big fucking mansion, swimming pool inside the house and everything,” adds Joe. 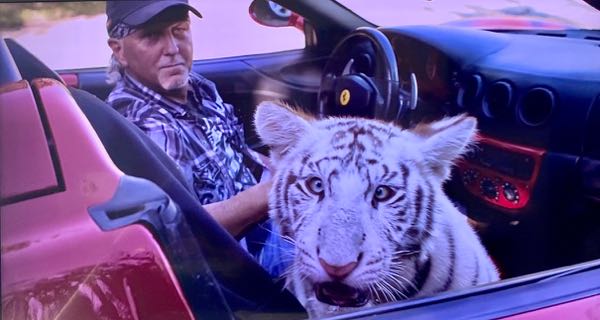 A “businessman”. Also, the crossed eyes on the tiger take this to the next level.

Ferraris, and similar rich-person props, are not a good sign in someone you’re doing business with. It’s a code-red warning that they value appearance above anything else, like say, morals. They will have no hesitation in becoming your ‘friend’, then taking your money.

So Joe made Jeff his business partner. Jeff got Joe to sign over the zoo to him, as a cunning protection strategy against Carole Baskin’s lawsuits. And guess what? Jeff kept that zoo.

Who could have seen that coming? From a guy who, upon getting access to tiger cubs, stashed two into ‘Louis Vuitton’ roll-on luggage to get them up to his Vegas hot-tub hotel suite. As a party lure for packs of young women. Ew.

Then, inevitably: “I didn’t know he was behind on the Ferrari payments.”

If people who want to do a deal with you are trying really hard to look successful, don’t walk away. Run.

Maybe it’s just me, but if you’re being interviewed, put the monkey butler in another room. Particularly if you’re in an official law enforcement role. 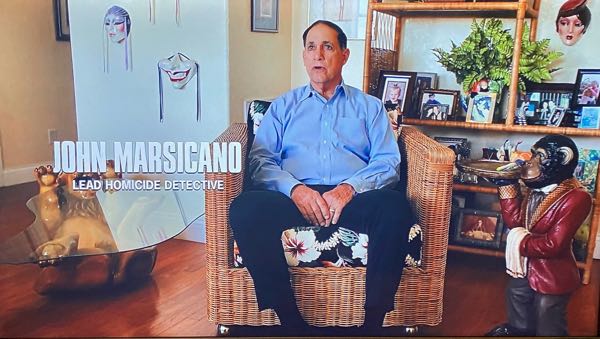 Unless it’s there to distract from that weird-ass coffee table on the left.

Finally, know your safe exposure to Tiger King viewing. I watched the whole thing a second time over the weekend, to research this story for you, and can confirm that it’s above the safe adult dosage. Watch with caution, my friends, and also remember to not run for president or governor of Oklahoma, hire hitmen to take out competitors, and particularly, never put out promotional condoms with your face on them.

I think that’s all.

NOW READ: Primitive, soulless and uninspiring: No, online conferences are not the way of the future

NOW READ: How to prepare for business success in a post-pandemic world