Time to break the surplus promise? 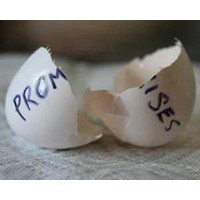 Life’s never easy when you’re the World’s Greatest Treasurer. You certainly have to have a bit of sympathy for poor old Wayne Swan, who has to operate in the nightmarish world of federal politics, where the national interest is never as important as political point-scoring.

Swan has the problem that never goes away. For the best part of five years, he’s been forced to watch as tax revenues have been buffeted by the GFC, a slowdown in consumer spending, anaemic property prices, as well as a weak sharemarket. More recently, he’s also had to worry about a fall in commodity prices, which has and will continue to crimp tax receipts from Australia’s golden goose, the mining sector.

If that hard place wasn’t enough, Swan is also pinned in by the rock that is Labor’s promise to return the Budget to surplus in 2013-14.

It’s a promise that keeps getting harder to keep. Today, there are reports that the public service has been told to find another round of spending cuts to help, just weeks after Swan announced a raft of cuts and revenue grabs in his October mini budget.

That’s hardly a surprise given what most entrepreneurs are seeing in the economy. Anecdotally at least, the outlook for company profits outside the mining sector is poor. There’s been some pick up in commodity prices of late, but the mining golden goose just isn’t laying eggs like it used to.

Given Swan’s predicted Budget surplus is just $1.1 billion (or it was in November), it seems likely that Swan and Finance Minister Penny Wong are going to need to keep finding cuts for many months to come.

But the cuts are coming amidst what is an increasingly worrying global backdrop. While Swan seized on last week’s economic forecasts from the OECD to show how Australia’s growth is so much better than anywhere else in the world, the key message from the IMF update was that it remains concerned about a second major global recession.

Clearly, Europe and the US provide the biggest concerns. When the OECD talks about governments doing whatever they can to restore confidence, I doubt little old Australia figures much in the conservation.

While I can’t profess to knowing nearly enough about economics, I do wonder what this surplus by a thousand cuts does for confidence in Australia.

Does it make anyone feel more confident when we have to hear about round after round of cuts to protect what is a paper-thin surplus?

If federal politics was not in the state it’s in, a sensible government might have come out by now and carefully explained that as the global economic outlook worsens it will take extra steps to stimulate the economy. If that means running a small but manageable deficit, we can cope.

Instead, we get Shadow Treasurer Joe Hockey saying this morning that the government is about to break its most important promise.

Yes, Prime Minister Julia Gillard and Wayne Swan were silly to make this promise in a world with so many unresolved economic problems. Sure, there will be plenty of economists and economic commentators who say the Government should strive for a surplus to underline its discipline.

But the question should still be asked: is the fanatical surplus promise one that should be broken?