The ASX-listed company has unveiled bold plans to create Australia’s first agave spirit at scale, and co-founder and chief executive Drew Fairchild tells SmartCompany a network of smaller businesses are helping it realise its vision.

These businesses will be involved in everything from planting and harvesting the hundreds of thousands of agave plants at its Eden Lassie farm, to designing and building a visitor centre to attract tourists to the Whitsundays region.

Fairchild says Top Shelf has taken a “considered” approach to these partnerships, seeking out like-minded businesses that can fill the gaps in its own expertise, and which are prepared to get involved in what is essentially a large experiment.

“I think what we’ve set out to do is find people that have that sort of can-do mindset and often that is in small business,” Fairchild says.

“You’re not going through the bureaucracy of big business”.

Top Shelf has taken a similar approach in other parts of its business too. In its home town of Melbourne, the company’s Grainshaker Vodka brand has installed a distillery at popular food precinct Welcome to Thornbury, which Fairchild says came about via a straightforward conversation with one of the owners, Peter Lalor.

The Thornbury distillery opened in March and Top Shelf intends to expand this ‘local distillery’ model to other locations too, teaming up with established hospitality venues around the country. The distillers will be used to introduce its vodka to consumers, as well as forming incubation and innovation hubs where Top Shelf can undertake its research and development.

This culture of partnering with other businesses to meet a clear need in the business has been part of the Top Shelf story from its beginning seven years ago, explains Fairfchild.

Early on, the company needed marketing expertise, and so a small marketing business took equity in Top Shelf to help build out the brand. Similar deals were done with a company to help with Top Shelf’s bottling and canning operations, and its insurance.

“Of course you need to raise capital, but every time we had the conversation, it was more than just capital that we were after. It was really around people putting an effort in and collaborating.” 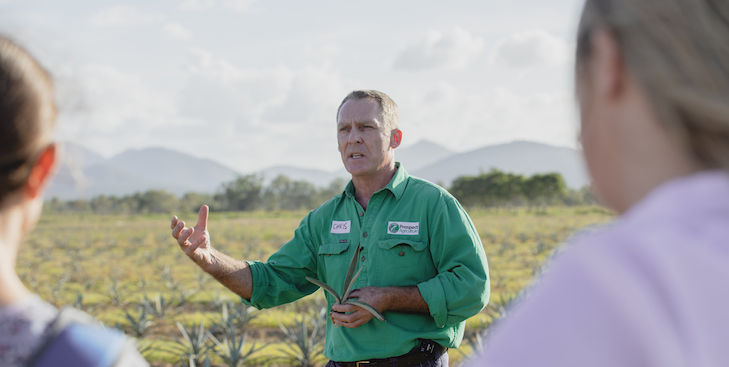 The same approach is now coming full circle for the business, which now takes on contracts to bottle and can drinks for other smaller brands at its facility in Cambellfield in Melbourne’s north.

“At some point in time, someone gave us that opportunity,” Fairchild says.

There’s a recognition too that by fostering collaboration within the industry, the benefits can be shared.

“We think if one day you can walk into a Dan Murphy’s and there’s an Australian spirits category, like wine, then I think we’ve all contributed to that.”

SmartCompany travelled to the Whitsundays as a guest of Top Shelf International.

ASX-listed spirits maker Top Shelf International has ambitious plans to create an Australian-first agave spirit from its hundreds of thousands of plants located on a farm in the Whitsundays.

This looks fantastic but re first – isn’t there a company in nsw producing an agarve spirit ??