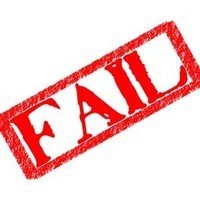 Three and a half years on Twitter, for a business, doesn’t sound like a long time, however in the world of social media — it is, believe me!

I have learned so much along the way, building my own following, but also that of Firebrand’s, which now has well over 20,000 followers.

In today’s post, I practice one of the important lessons I learned on Twitter: share! Here are 18 things I learned you should not do on Twitter if you want to market yourself or your business.

1. Do not set up auto Direct Messages for new followers. It really annoys people.

2. Do not “protect your tweets”. What’s the point of using Twitter for marketing if people can’t see your tweets?

3. Do not set up a spam filter for your tweets. It means that when people follow you, they’ll get a follow-up tweet that says: “xx uses TrueTwit validation service. To validate, click here”. They then have to click the link and fill in one of those annoying visual letter puzzles to prove they’re not a spammer. Most people won’t bother, so you risk losing followers.

4. Do not schedule your tweets so that multiple tweets suddenly appear in your stream at the same time. You will be labelled a spammer and people will unfollow you.

5. Do not automate tweets of your job postings. Pick a select few, customise each one, and spread it out across the week, alongside great content.

7. Unless you’re a food blogger, don’t tweet what you had for breakfast/lunch/dinner. People don’t care and you’re wasting their time.

8. Stay away from banal tweets. I read one the other day that said “Went to scratch my nose and poked myself in the eye.”  Immediate “unfollow”!

9. And while I’m at it, don’t tweet about sex or religion unless this is your area of specialisation and that’s what you’re marketing.

10. Don’t treat Twitter as a broadcast channel – do more listening and engaging than talking.

11. Do not overly promote yourself. Be generous, add value and share a lot. It’s the best kind of promotion you can do.

12. Do not use CAPITAL LETTERS – it’s the equivalent of shouting and no one likes it.

13. Do not post your tweet on other social platforms (manually or automatically) unless it is written appropriately for the other platform. If your tweet contains hashtags or @, remove them for Facebook or LinkedIn. Also remember that the tone of each platform should be different. It’s best to customise for each one. But keep the hashtags when using Pinterest.

14. Do not use more than two hashtags in your tweets. It makes your tweets very unappealing to read.

15. No one cares where you checked in, or what you’re the mayor of on FourSquare. Stop polluting feeds with this trivial information.

16. Don’t set up an auto-tweet announcing how many people unfollowed you. Not cool. Not cool at all.

Carolyn Hyams is the global marketing director for Firebrand Talent Search, responsible for Firebrand’s brand strategy and execution in the UK, Europe and Asia-Pacific.