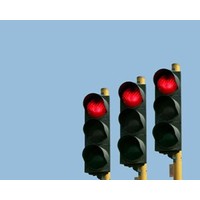 I still have the tie presented for calling the 1989/91 recession early in 1988, a reminder in the cupboard to listen to the rolling thunder on the ground, not the populist buzz.

Our ear to the ground is based on a formula of direct inputs of data not in the usual economic rulebook. This is my eclectic mix including used equipment prices and current ratios of a range of businesses and percentage of orders converting to dollars, as well as variations in monthly sales. As a long-run monitor, they are a bit rough at the edges for those in Treasury, but they work when your own dollars are at risk.

And they need adjustment for circumstances, in particular currently for the strong Australian dollar and eventful changes in technology and thus buying patterns – not just of consumers, but also in business to business heartland.

So our review across our customers and suppliers in Australia shows a sudden fragility not seen since 1989 or 2001.

What is showing up?

A fall in prices of capital equipment, but also to a lesser extent in commercial and industrial property, is having now a corrosive impact on balance sheets, and the headspace, of family-owned businesses.

The cost of updating equipment is more expensive when the trade-in price has fallen far, far further than the slight fall in new price, due to the stronger Aussie dollar and technical efficiency. So some businesses delay upgrades, which pulls back their efficiency and increases operating cost.

We are seeing this with price increases not justified by leading edge cost monitors.

Businesses in this situation are being punished, and will continue to go backwards. If you know your sector well, monitoring these types of businesses can lead to cheap but significant expansion – if you have not allowed the trade over cost blowout to stop your continuing efficiency improvement.

As an example, a typical fridge motor used in food manufacture or preparation had a trade over cost of about $60,000 per unit three to five years ago. Now that would be almost double. Its revenue potential has hardly changed in that period, although energy efficiency has slightly lowered operating costs (so long as a much more expensive repair technician does not need to be called out!)

If the hard assets of a privately-owned business are going down in value, while working capital demands are increasing as customers stretch payments, the net value of the business falls dramatically. This is why banks, which more carefully these days monitor used equipment sales and auctions and see overdraft breaches, are being particularly tight.

A bit of investigation, which we do more on our suppliers and subcontractors than the banks do, highlights the falling current ratios. The Australian economy may be in reasonable condition in gross terms, but even in so-called boom areas, the order cycle is particularly stop/start. Our operation in a boom mining sector is suffering as much as businesses in the slow southeast corner. A huge wave of last-minute orders after a lull is terrible for cash flow, let alone cost efficiency. Its worse in low unemployment areas where skilled and casual labour at short notice costs a fortune!

So the stop/start cashflow on top of net asset crunch is having an impact, on our measures, as great as the interest rate super hikes of the late 1980s.

It has only recently started to hit because currently interest rates are relatively low, and a bit of fat in most businesses from the roaring noughties has put off the fateful day.

That impact is now being braked by the banking caution.

The global situation causes banks to be more cautious, and never have business banking managers – who are also looking over their shoulders at their own job prospects in bank rationalisations – been more cautious.

So just when privately-owned businesses of all sizes need more working capital, less is available. Or it’s at a cost. One supplier who employs dozens and has substantial real estate has just had what they thought were conservative financials upended. The reduction in property values generally has knocked their loan to valuation ratios up 15%. They either cut working capital facilities, or pay at least 4% more, and it’s not recoverable in revenue.

Other than causing much angst among family shareholders and a generally sour attitude to life in general (as picked up in opinion polls), the serious aspect is that it discourages funding business expansion, upgrading and development.

Outside the super entrepreneurs, the great bulk of employing businesses decide to follow the banks and de-risk.

If they do, they survive, but most of the economy muddles on moodily as everyone holds dollars tight.

If they ignore these serious warning signs, they suffer slower or faster death, or disintegration, depending on their individual and competitive situation. Their choice.

Or you can be courageous if you had the foresight to keep the piggybank stocked and build a market position cheaply.

We are trying to ensure all our suppliers and subcontractors and customers understand the seriousness and act. Now.